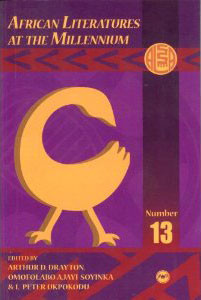 This selection of essays fairly represents the geographic and thematic range of presentations at the millennial conference of the African Literature Association (ALA) in Lawrence, Kansas, which explored enduring themes and new directions in African and African Diaspora literatures. The selected essays are arranged in the Table of Contents in the following five sections to facilitate readers.

-"Oral Traditional," the foundational genre, is appropriately the introductory section, which also introduces themes echoed throughout the volume.

-"Writing Africa I" immediately establishes links with the foregoing section in part through its analysis of the presentation in African literature of the continent’s 20th-century experience.

-"Writing The Diaspora" explores an emblematic relationship between form and meaning in the context of a 20th-century experience, which the Diaspora for the most part shared with Africa. The last two essays, bringing the Diaspora and Africa together, add an interesting dimension that anticipates the next section.

-"Writing Africa II" for the most part deals with authorship in problematic conditions characterizing postcolonial Africa examining the link between writer and the socio-political.

-"Past, Present, Future: The Connect" caps the emerging perspectives of the volume, bringing together both past and recent experiences of writers and their audience and examining consequential possibilities and imperatives—a veritable Sankofa connect.

ABOUT THE EDITORS
ARTHUR D. DRAYTON is Professor Emeritus and former Chair of African & African-American Studies and former Director of the African Studies Center at the University of Kansas.

OMOFOLABO AJAYI-SOYINKA holds a joint appointment as Associate Professor in the Department of Theatre & Film and in Women's Studies and is an adjunct in African and African-American Studies at the University of Kansas.

I. PETER UKPOKODU is Professor and Chair of African and African-American Studies and a courtesy professor of Theatre & Film at the University of Kansas.