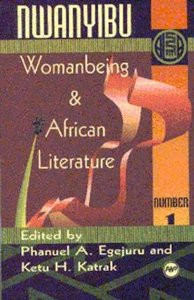 These essays explore the condition of African women, focusing on what one-contributor describes as "the discourses of colonialism and sexism (as) sites where gender, sexuality, race and power constructions intersect." The essays are divided into four categories:

The first section under the title "Realities and Fantasies of African Womanbeing" includes essays such as Phanuel Egejuru's exploration of "The Paradox of Womanbeing and the Female Principle in Igbo Cosmology."

Section two, "New Options and Redefinitions of Womanbeing," includes Janice Spleth's discussion of Mudimbe's Before the Birth of the Moon; Pauline Uwakwe's cross-cultural analysis of the similarities and differences among female characters in works by continental African writers and those in the diaspora in "Female Choices: The Militant Option in Buchi Emecheta's Destination Biafra, and Alice Walker's Meridian."

The last section on "Francophone Writers and Womanbeing" includes essays by Janis Pallister, Hal Wylie, and Gerise Herndon, constituting studies of black women characters in Sembene Ousmane's films, and varying portrayals of female characters by male and female authors such as Sembene and Aminata Sow Fall.

ABOUT THE EDITORS
KETU H. KATRAK is the Director of the Asian American Studies Program and Professor of English and Comparative Literatures at the University of California, Irvine.

PHANUEL EGEHURU is the author of the novel The Seed Yams Have Been Eaten, described by Chinua Achebe as the best novel written on the Biafran war. She is also the author of many articles focusing on women writers and their contributions to African Literature.