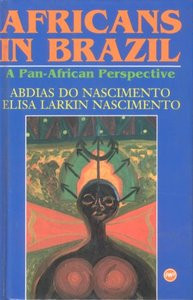 Here is the voice of the second-largest African population in the world. The senior African-Brazilian scholar and activist tells his life story and challenges the academic distortion that consistently have denied the existence of white supermacism in Brazil. His co-author complements, develops and extends these considerations to the South and Central American region as a whole. The result is a daring and thoughtful approach to the understanding of the African experience in "Latin" American societies and their approach to the rest of the African world.

ABOUT THE AUTHORS
Abidia do Nascimento, Professor Emeritus of the State University of New York at Buffalo, founded the Black Experimental Theater in Rio de Janeiro in 1944. During his exile from Brazil's military dictatorship (1968-81), he was active in Pan-African world affairs. In 1983, he became the first African-Brazilian Congressman to defend his people's interests in the nation's House of Deputies. He continued his political activity as Secretary for Rio de Janeiro State Government's newly created Secretariat for the Defense and Promotion of Black People's. In late 1991, he left that post to take a seat in the Brazilian Senate.

ELISA LARKIN NASCIMENTO, M.A., J.D., SUNYAB, is co-founder and director of the Afro-Brazilian Studies and Research Institute (IPEAFRO) of Rio de Janeiro. Since 1975, she has participated actively in political and academic activities related to Afro-Brazilian affairs.