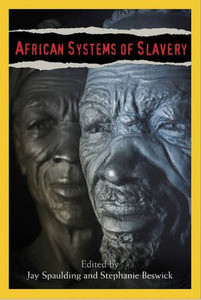 African Systems of Slavery continues a discussion opened by Suzanne Miers and Igor Kopytoff in 1977 with their seminal collection Slavery in Africa. The present volume contains new offerings by original contributors as well as valuable studies by newcomers who share the original editors’ perspectives. These include a nuanced understanding of African institutions of human subordination and a preference for definitions and terminology rooted in African culture. While some African historical situations attained a status that would justify the application of concepts imported from the world of Atlantic or Islamic slavery, many did not, and the burden of this volume is to oppose the politically popular but intellectually highly reductionist tendency to do so. African slavery, in the first instance, should be approached on its own terms.

The contributors address a variety of historical settings both old and new, from large kingdoms and decentralized small-scale communities, widely distributed across the reaches of an admittedly vast and complex continent. Implicit in their collective analysis is a critique of a conventional periodization of African slavery whereby the institution was primarily an Early Modern phenomenon, first introduced but then abolished by aliens at the price of a nineteenth and twentieth-century period of colonization. Rather, it would seem that diverse African systems of slavery not only long antedated the intrusion of Muslims and Europeans, and interacted in diverse complex ways with the challenges and opportunities posed by those intrusions, but may now also have arisen again in modern forms born of ancient cultural roots but expressed in very contemporary idioms. The search for true freedom continues.

ABOUT THE EDITORS
Jay Spaulding (PhD Columbia University) is a medievalist by background who specializes in the precolonial history of Northeast Africa. He is author of The Heroic Age in Sinnar, co-author of several books on the history of the Funj Kingdom, Dar Fur and Wadai, and has written numerous specialized studies concerning aspects of regional history. He is a founder and past president of the Sudan Studies Association. He teaches at Kean University.

Stephanie Beswick was born in Khartoum and spent her childhood years in a variety of rural settings in North and South Sudan during the late colonial and early independence era. She studied African history at Rutgers and Michigan State University and is the author of Sudan’s Blood Memory, a history of the Dinka community of South Sudan. She has published numerous articles on Sudan and is presently writing a monograph on slavery and resistance in Southern Sudan. She has co-edited White Nile, Black Blood and two special issues of Northeast African Studies devoted to women’s history. She is President of the Sudan Studies Association, and teaches at Ball State University.