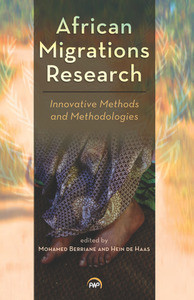 This book presents a range of innovative and creative methods which have recently been developed in the conduct of migration research in several African countries.

While migration out of Africa has become the subject of growing interest and concern, there has been much less research into patterns of international migration within the continent, only a small fraction of which may result in journeys to Europe, North America and beyond. This dearth of research has been due to limited institutional capacity, the short-term policy agendas of international organisations, and the absence or poor nature of official statistics. This book goes some way towards addressing this gap by showcasing the sheer diversity of African migration patterns and the various ways they can be approached empirically.

The chapters show how a variety of less conventional and often cost-effective methodologies can greatly contribute to mapping African migration, and how they can help to obtain valuable empirical data in contexts where appropriate sampling frames are often absent, migrant populations are difficult to identify or approach and resources are limited. The book also addresses the more fundamental methodological and epistemological questions underpinning the different methods of data collection.

The contributors cover key methodological issues including methods for random and non-random sampling drawing on a variety of data sources; single-sited, multi-sited, matched and ‘on-the-move’ methods for data collection; the use of spatial samples; and the use of non-conventional data sources such as marriage registers and information obtained through NGOs working with migrants. Several chapters present innovative methodologies based on studying vulnerable or difficult-to-approach migrant populations that traditional methodologies have difficulties capturing, such as undocumented migrants, child migrants, refugees and migrants who are ‘in transit’. Two chapters focus on methodologies that allow us to measure the enforcement of migration policy and the role of corruption officials in migration processes. The book also critically considers the need for representativity and shows different ways in which multi-method approaches and data triangulation can generate valuable knowledge on migration. The book addresses crucial ethical and safety issues which are particularly important when conducting research among vulnerable populations.

Besides appealing to an academic audience including migration specialists, Africanists and students, the volume will also be useful to a broader readership of researchers, practitioners, NGOs and governments involved in migration research and/or interested in research methods and methodologies. The chapters present techniques that can be applied in constrained research contexts not only in Africa but also in other parts of the world.

MOHAMED BERRIANE is a Senior Professor at the University Mohammed V - Agdal in Rabat, Director of the Centre for Geographical Research and Study, and Co-Director of the ‘Laboratoire Mixte International MediTer’ (IRD - France). His research interests include local and regional development issues, and the impact of Moroccans’ international emigration on their regions of origin. He has published several articles and books on Moroccan and North-African migration and he has co-edited the Atlas de la inmigración marroquí en España. He is a member of the Hassan II Academy of Sciences and Techniques, and a Research Associate at the International Migration Institute, University of Oxford.

HEIN DE HAAS is Co-Director of the International Migration Institute at the University of Oxford. His research focuses on the linkages between migration and broader processes of human development and globalisation, primarily from the perspective of migrant-sending societies. He did extensive fieldwork in the Middle East and North Africa and, particularly, Morocco. He has published on a wide range of issues including migration theory, migration and development, remittances and transnationalism, integration, migration determinants, migration futures and the links between migration and environmental change.