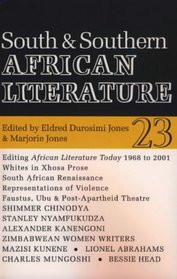 In his editorial in this recent issue of ALT, Eldred Jones outlines the literary challenges South and Southern Africans face in the post-independence, post-apartheid years:

“The dismantling of legal apartheid has liberated the culture and with it the languages and literatures of South Africa into the outside world. It has also freed the country itself from a monumental block which limited the creative imagination, forcing it into a posture of reaction against an all-pervasive, oppressive government... The coincidence of protest politics and protest literature has been overtaken by events. Now shorn of its inhibitions, the literature must assume a wider and deeper responsibility.”

These particular issues, including many others, in South and Southern African literature are carefully examined by the contributors in this volume.