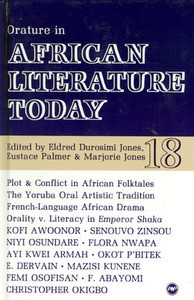 African novelists, playwrights and poets, even when they are writing in one of the colonial languages, draw on their rich ethnic bases. These resources provide ideas, themes and linguistic delight. The myriad languages of the continent, although used today mainly for workday communication, have through the centuries been vehicles for the oral artistic verbal compositions and transmission now formalized as orature'.