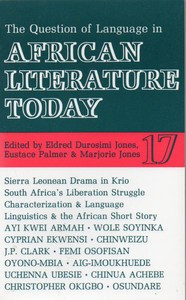 Most African writers are at least bilingual, speaking an African language and writing in an acquired one.

How adequately do poets, novelists, playwrights and short story writers use their adopted languages of English and French?

To what extent do their African language backgrounds influence or even enrich their achievement in their adopted languages?

Do they still use their indigenous languages to express contemporary reality?

African Literature Today 17 explores the performance of such writers as Soyinka, Clark, Okigbo, Oyono-Mbia and Uchenna Ubesie, among others.