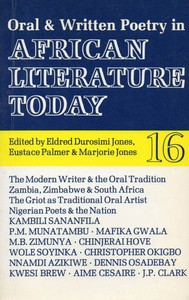 Poetry is very much a growing concern in Africa. The contemporary poet is continuing a long tradition of poetry which in many places pre-dated the advent of writing. The enthusiasm for traditional poetry in Kenya and other parts of Africa has institutionalized the oral form in the written form.

The writing poet may well pine for the central position which the griot once occupied in society. But poetry has been and still is a fighting weapon. The poets too often speak from prison -Brutus, Soyinka Jacinto.

From their roots in Africa to the Antilles, they have carried their songs into battle and too often paid the price. Aime Cesaire's poetry, as Abiola Irele demonstrates, is rooted through myth and metaphor in the soils of Africa and griots and scribes share a common heritage deep in African myth and the rhythms of nature.