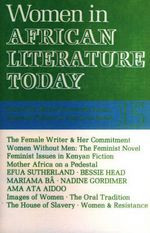 This is a recognition of two important facts. Firstly, that African women writers, as a number of articles show, have been neglected in male-authored studies and journals. Secondly that the last ten years or so have at last, despite all sociological factors against them, shown a blossoming of accomplished works by African women writers.

Running through the articles is the refrain that the cause of womanhood has been inadequately served by African male writers in their works. It is maintained by Sylvia Bryan and Jennifer Evans that there are some men writers who have portrayed independent, complex women characters. However, in the final analysis it has to be left, as Katherine Frank suggests, to women writers to present female characters with a destiny of their own.