AFRICAN COMMUNITIES IN ASIA AND THE MEDITERRANEAN: Identities Between Integration and Conflict, Edited by Ehud R. Toledano 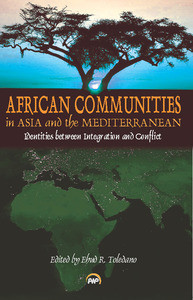 AFRICAN COMMUNITIES IN ASIA AND THE MEDITERRANEAN: Identities Between Integration and Conflict, Edited by Ehud R. Toledano

The undeniable presence of the past and its cultural vestiges in the daily lives of displaced populations has been a noticeable feature of diasporas across the globe. The world of spirits and the need to keep in constant touch with them have been part and parcel of almost all pre-modern cultural systems, African ones being a prominent case in point. There can hardly be any doubt that coerced displacement and forced migration of enslaved populations from Africa into many parts of the world was a traumatic experience, and Africans in the diasporic communities of the Mediterranean and Indian Ocean Worlds had frequent and intense recourse to significant components of their origin-cultures. They used that cultural dialogue as a means to alleviate the stress caused of being uprooted and forcibly moved into new, alien societies, into which they had to be absorbed and integrated.

The study of migration and diasporas has become increasingly fashionable in recent years, partly because it has clear political implications to contemporary concerns in many societies that had been the target of forced, semi-voluntary, or voluntary migration. Of particular relevance to the current volume is the heritage of enslaved persons and their descendents, well past manumission, who had to cope with social, economic, and political disabilities sanctioned by law and practice. Generations after emancipation, these men and women still have to negotiate their own identities, confront discrimination by the state and from other social groups, and fight for basic rights. Colonialism and enslavement, for the most part, affected views and social practices that had a detrimental impact not only upon Africans in non-African societies, but have also profoundly transformed majority cultures and dominant value-systems.

The chapters in this volume do not deal with the Atlantic world, where the study of forced migration, enslavement, and diasporas has attracted much scholarly interest that has produced a large body of literature. Instead, the contributors concentrate their efforts on the less studied regions of the globethe Mediterranean and Indian Ocean worlds. They do not seek here to resolve the two-models dispute, but rather hope that the studies presented in this volume will, in and of themselves, help establish a clearer understanding of the differences and similarities that existed between the types, modes, and practices of enslavement in those wide geographical spaces. Still, their main goal in this project aims to bring to the fore a sound statement, which is both empiric and grounded in theory, about processes of identity construction, or identification, among uprooted Africans and their descendants in the Mediterranean and Indian Ocean worlds.

EHUD R. TOLEDANO (PhD, Princeton) holds the University Chair for Ottoman & Turkish Studies in the Department of Middle East and African History at Tel Aviv University (TAU), Israel. He has conducted extensive research in Istanbul, Cairo, London, and Paris, and taught courses on Middle East history at TAU, UCLA, Oxford, and other leading universities. Notable among the books he has authored are:  The Ottoman Slave Trade and Its Suppression, 1840- 1890, State and Society in Mid-Nineteenth-Century Egypt, Slavery and Abolition in the Ottoman Middle East and As If Silent and Absent: Bonds of Enslavement in Islamic Middle East.