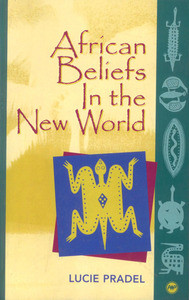 Like a kaleidoscope, the Caribbean world displays the vibrant colors of its diversity. Ethnic groups from four continents brought their customs and beliefs to this New World. The sheer number of African people brought to the Caribbean islands perpetuated through their spiritual vitality, the central role played by traditional religions in African life. Though they hadn't brought along the material support of their worship, they had buried in their memory other essential supports: memories of gods, of myths, rites, rhythms, tales, legends, proverbs, songs, dances, sculptures, all the fundamental vectors of their religious thought. Through a process of secularization, continuity, adaptation, creation, syncretism and synthesis, the elements helped vitalize the artistic, profane and sacred domains of Caribbean cultures.

The book aims, on the one hand, to deepen the knowledge of the composite character of Caribbean culture by showing the diversity of the cultural contributions of its African origins. On the other hand, through a census of popular traditions, artistic and literary, it demonstrates the fact that the secularization of indigenous and imported sacred forms led to the vitalization of contemporary artistic genres in the West Indies. This process thus articulates the dialectic of unity of the Caribbean and the New World.

This book is part of a broad project on the theory of secularization of sacred forms and vitalization of artistic genres in the Caribbean. A second aspect deals with oral lore (myths, legends, tales) from a transnational and translinguistic perspective.

ABOUT THE AUTHOR
Lucie Pradel is an associate professor at the Universite Antilles-Guyane and the Center for Caribbean Studies and Research.