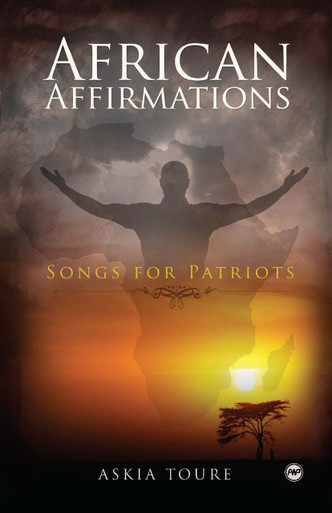 At a time when human existence is threatened by the absurdity of power and greed, Toure advances a poetry that celebrates and castigates, that kisses, curses and sings, reminding us as Blake, Whitman, Bly, Cardenal and Mackey that our soul emerges from soil; that we are tied to the cosmic umbilical of poetry and song; that even in the midst of foretold dangers, there is still time enough for dreaming and for reason

In his rhythmic language, Toure is always limning out a better future. His major poetic figure has always been Apocalypsesometimes in the image of fire, always in the sense of greater knowledge being awakened in usHis style of presentation, (closely approximated by the Last Poets), like that of the Psalms, was never dramatic reading but very nearly song.

The titles of many of Toures poemsilluminate a cohesiveness in his art. This cohesiveness grounds him in the artistic principles of the Black Arts Movement and at the same time provides him with a contemporary revolutionary aesthetic with its foundations in Africa and the East In Dawn-song!, he successfully develops a heroic poetry that creates its own artistic matrix, which indeed parallels what John Synge, Augusta Gregory, [and] William Butler Yeats did when they created the Abby Theatre [in Ireland].

The music of John Coltrane, Charlie Parker, Thelonious Monk, and other jazz greats suffuses the poetry of Askia M. Toure. To a rich lyricism he adds a cosmic vision that isapparent in [the bulk of his published work]. His commitment to raising the national consciousness has carried over to the present era when his messages challenge the destructive forces wielding genocide both physical and mental [against Blacks].

-Joanne V. Gabbin, Ph.D.
Author of The Furious Flowe: African American Poetry from the Black Arts Movement to the Present

Over the past three decades, Askia M. Toure has contributed immeasurably toAfrican-American, Multicultural, and Mainstream aesthetics, art, literature,and struggle. This he has done as Poet, Polemicist, Editor, Teacher, Civil RightsActivist, Conceptual Architect of the Black Arts Movementand, now, asSenior Griot-Bard and Forger of New Afro-centric forms and ideas in the literaryarts. Perhaps [hes] the only scholar-artist-activist who so fervently contextualizes ancienttraditions within todays Black and Multicultural poetic arena.

-Eugene B. Redmond
Professor of English and editor of Drumvoices Revue

ABOUT THE AUTHOR
ASKIA M. TOURE (www.AskiaToure.com), poet, essayist, theorist and co-founder of the historic Black Arts Movement, is a Djali (griot) and Black Studies pioneer. He is a member of Poets Against the Killing Fields, an Anti-war writers organization.