AFRICA AFTER THE COLD WAR: The Changing Perspectives on Security, Edited by Adebayo Oyebade and Abiodun Alao, HARDCOVER 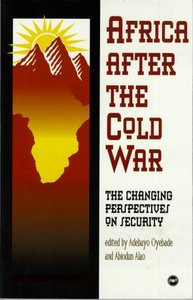 AFRICA AFTER THE COLD WAR: The Changing Perspectives on Security, Edited by Adebayo Oyebade and Abiodun Alao, HARDCOVER

The global political changes that we have seen in the last few years have shown quite clearly that the Cold War has, indeed, ceased to be the dynamic factor in international relations. In Africa, the march toward a new world order is fraught with old problems and emerging ones: extreme ethno-religious nationalism still underscores intra-African conflicts; the continent is sunk more than ever before in the deep abyss of economic stagnation; catastrophic wars are still going on; environmental degradation is increasingly becoming a major problem, and in some states, the search for a democratic political system has turned into civil violence which threatens the very foundation of national sovereignty. These are fundamental problems that collectively pose a threat to the security of the continent.

Although it is widely recognized that Africa's security problems are acute, it has never been a subject of much intellectual inquiry. This lack of scholarly discourse of the many dimensions of the problem of African security is the major consideration for this book. The approach to the question of security in this book differs markedly from the traditional approach that gives primacy to the threat of military aggression as a sole factor in state security. A departure must be made from this dominant preoccupation in a new global order that has seen profound changes. The authors then place primary on the complex problems of ethno-religious nationalism, economic stagnation, catastrophic civil wars, environmental degradation and the prospects for democratic structures in considering Africa's security issues after the Cold War.

ABOUT THE AUTHOR
ADEBAYO OYEBADE teaches in the History Department at Lane College in Jackson, Tennessee. Formerly he was a lecturer in African history at Ogun State University, Nigeria.