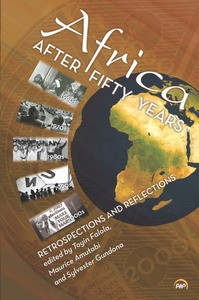 By the end of the 1960s most African countries gained political independence. The new corps of leadership envisioned not only a politically stable continent; they also imagined a more cohesive Africa, with bubbly economies driven by the continent’s enormous natural and human resources.  Approximately fifty years after independence this hope of a politically stable, integrated, and economically thriving Africa has remained elusive for most African countries. African economies remained undiversified with limited capacities for industrialization and economic development. African economies remained tied to western European counties and the United States of America. At the center of the process of configuration and reconfiguration of the continent is the unchanging plight of the ordinary citizens who incessantly remained pawns in the hands of both foreign and indigenous political schemers.  The set of essays in Africa After Fifty Years address a wide range of issues in the political and socio-economic development of post-colonial Africa as they interacted among themselves and with the rest of the world. The interdisciplinary conversations are intended to provide useful insights to scholars and policy makers of the continuing challenges and opportunities for Africa’s political stability and economic growth.

The first section covers issues on the problems and triumphs of the processes of knowledge generation, cultural preservation, and expression with essays on the trajectories of post-colonial African historiography, selective memory and the reinterpretation of post-independence socio-economic and political projects. Other essays underscore contestations over the significance of heritage sites and historical monuments as well as the centrality of masquerades in knowledge preservation. In the second section issues on gender, spirituality and identity in post-colonial Africa are explored. Essays in this section reflect on gender as it affects appropriation of resources in Africa, the capacity of African spirituality and values to address the problems of governance and development, the relevance of the social teachings of churches in the generation of the spirit of entrepreneurship as a vehicle of poverty alleviation and the centrality of Internet discourse in the reconfiguration of cultural identities. Ethnicity, militancy and the crises of good governance in Africa is examined in the third section. Essays explore the impact of ethnic militancy and ethnic marginalization on democracy, political stability and economic development. The last section looks at issues of intra-state and inter-state conflicts and the crises of post-independent Africa’s development.

Toyin Falola is the Frances Higginbotham Nalle Centennial Professor in History and a Distinguished Teaching Professor at the University of Texas at Austin. He is a Fellow of the Historical Society of Nigeria and the Nigerian Academy of Letters. He has several awards and honors to his credit and has published numerous books.

Sylvester Gundona is a PhD Candidate in the Department of History at the University of Texas at Austin. Gundona received his Mphil degree in History from the University of Ghana, Legon. He is currently working on his dissertation on Leprosy and the politics of public health in colonial Ghana.  His research interest is in the social history of health and disease in Africa.

Maurice N. Amutabi is an Associate Professor in Social Sciences at the Catholic University of Eastern Africa, where he serves as the Deputy Director of Research and coordinates the Political Science Program. He taught at Central Washington University between 2005 and 2010. Amutabi received his BA and MA in Political Science and History from the University of Nairobi, Kenya. He received his PhD in African Studies from the University of Illinois at Urbana-Champaign (UIUC). He is the author of The NGO Factor in Africa: The Case of Arrested Development in Kenya.