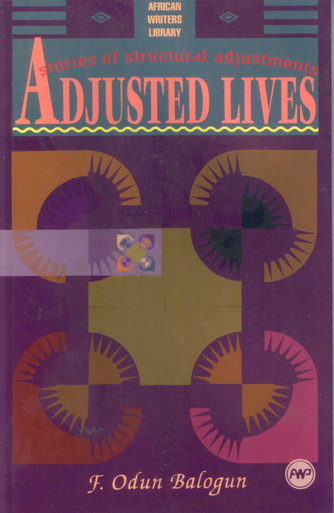 Adjusted Lives is a completed short story cycle which is divided into three parts, each of which contains three stories. The nine stories altogether constituting the collection propose a unified thesis: the now infamous Structural Adjustment Program (SAP) is not really a contemporary manifestation of a four-century-old phenomenon. African lives, the stories depict, have systematically been adjusted in the interest of, and by the merchants, priests, politicians, soldiers, and economists of the Western World since the seventeenth century; the only changes observable being int he external forms of the packaging, and not in the inner essence of the adjustment.

Part one, subtitles The Philosophy, presents images of African lives adjusting tot he brutal realities of slavery, colonialism, and post-independence external exploitations in three respective stories. The next three stories in part two, The Heresies, oppose the philosophy of adjustment in part one with images of heroes who uphold African traditional philosophy of existence, heroic leadership, and self-reliance in the pursuit of development. The last division, The Restoration, shows how African lives are once more being violently adjusted by external agencies during the contemporary era of SAP. A housewife, a student, and a university professor are respectively the representative victim-protagonists in the three stories in this section. The collection ends optimistically, envisaging a final end to the centuries-old external adjustments of African lives.

"In Adjusted Lives, Odun Balogun succinctly captures the stress and agony int he lives of Nigerians as they grapple daily with their country's economic woes resulting from the adoption of measures dictated by the International monetary Fund and the World Bank. Balogun writes with a mastery as he dramatizes with pathos, humor, and suspense his characters' ability to endure misery and still remain human."

-Tanure Ojaide, Ph.D., The University of North Carolina at Charlotte

"From the heroic Olusegun captured into slavery, to Jagun, the hungry university student, these stories recount the history of individual courage and vivid characters in real dilemmas. These are engaging stories whose structures and style vary from folktale-like and allegorical to dialogues of Platonic clarity and charm. A quiet indictment of exploitation and moving tribute to its struggling victims."