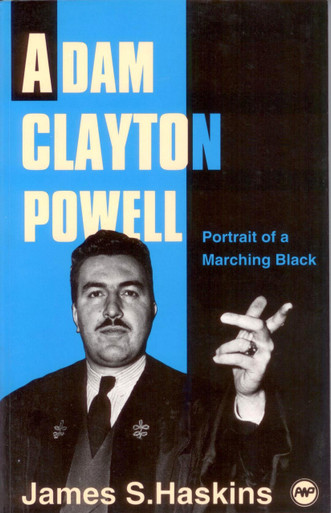 The name Adamn Clayton Powell, Jr. symbolized many things to many people. Pastor of the Abyssinian Baptist Church, America's largest black congregation. Congressman from Harlem for twenty-five years. Chairman of the powerful House Education and Labor Committee. Marcher for black civil rights as early as the 1930s. Flamboyant high-liver whose well-publicized excesses led to expulsion from Congress and near exile on his island retreat of Bimini. Symbol of hope for Blacks all over America for two decades. King of Harlem.

Who was this complex, charismatic, controversial man? James Haskins has used interviews with family, friends, and associates of the late Congressman to trace his life and public career. He tells of Adam Powell's privileged boyhood as the only son of a respected minister; of his fiery leadership as a young Harlem minister demonstrating for jobs for Blacks during the depression; of his years as the sole voice of black people in the United States Congress; his achievements as chairman of the Education and Labor Committee during the 1960s; the controversies which led to his expulsion from Congress; and the last bitter years in Bimini.

This perceptive biography both captures the essence of a remarkable black leader and established his place in history as the man who, "probably more than any other individual, laid the groundwork for the progress black Americans have made toward equal rights and power in America."

ABOUT THE AUTHOR
JAMES HASKINS is the author of over 90 books for adult trade and young adult audiences. His James Van DerZee: The Picture Takin' Man was published by Africa World Press, Inc. in 1991. He is Professor of English at the University of Florida, Gainesville.