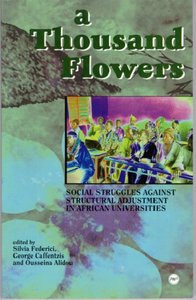 "This timely work is of seminal importance both for those interested in African problems in our time and those concerned with the destructive impact of the globalizing process all over the world. I urgently recommend this study to all who seek to understand the global predicament as we begin to enter a new historic phase. 'A Thousand Flowers' offers incisive, carefully documented analyses and illuminating insights."
--Dennis Brutus

Combining theoretical essays with reports and testimonies about campus life and campus struggles, the book provides a unique account of the impact of the World Bank's structural adjustment program on African education and the forces that are shaping the production of knowledge in Africa today.

Part II looks at teachers, and students, resistance against the dismantling of public education and in defense of academic freedom and the right to study. It includes articles on teachers, strikes and the role of academic unions in Nigeria and Kenya, the Malawi Writers Group before and after structural adjustment, and academic rights in Burkina Faso, students, activism in Kenya, Nigeria, and Niger. It also includes an extensive chronology of African student struggles against structural adjustment from 1985 to the present, pointing to the development of a new Pan-African student movement.

SILVIA FEDERICI is associate professor in Political Philosophy at Hofstra University and a coordinator of the Committee for Academic Freedom in Africa. She is the co-author (with L. fortunati) of 'Il Grande Calibano: Storia del Corpo Sociale Ribelle Nella Prima Fase del Capitale' (Franco Angeli 1984), and the editor of 'Enduring Western Civilization: The Construction of the Concept of Western Civilization and Its "Others" '(Praeger 1995).

GEORGE CAFFENTZIS has taught at the University of Calabar in Nigeria and is presently associate professor in the Department of Philosophy, University of Southern Maine. He is the author of 'Abused Words, Clipped Coins and Civil Government: John Locke's Philosophy of Money' (Autonomedia 1989), and 'Cutting Edge: Technology, information, Capitalism and Social Revolution' (Verso 1997). He is a founding member and coordinator of the Committee For Academic Freedom in Africa (CAFA).

OUSSEINA ALIDOU teaches in the Department of African American and African Studies at Ohio State University. She has worked as a consultant for several NGOs on issues of literacy, education and family planning in Africa. Her research areas include language and educational policies in Africa, women and gender politics in predominantly Islamic and Francophone Sub-Saharan African countries. She is a coordinator of the Committee for Academic Freedom in Africa (CAFA).