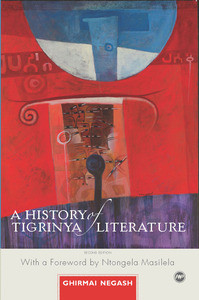 Negash’s continental and international visibility is very clear. He earned this through his monumental work, A History of Tigrinya Literature in Eritrea: The Oral and Written 1890-1991. In the sheer ambition of its historical sweep and the combination of Literature and Orature for its subject, it is groundbreaking while also making an important intellectual intervention in the study of African language literatures. Nothing of this magnitude has been accomplished with the same degree of unapologetic scholarly commitment and respect. In addition to establishing him as the leading scholar of Eritrean literature, it has paved the way for similar scholarship in Africa. Professor Negash is a literary and intellectual path finder.

For those of us concerned with African literature, philosophy, and cultural-intellectual productions this work is a boon—a vital resource. As a documenting exploration of the Tigrinya literary heritage of Eritrea, it is a ground-breaking undertaking. For layman and scholar alike, it is a glimpse into a rarely sighted region of indigenously grounded African intellectual culture.

Written not simply as an academic exercise but also as a critical weapon against the neocolonial assumptions by western scholars, Negash’s history frames Tigrinya literature as an indigenous epistemic source and post-colonial model (through a meticulous laying out of the relationship between literary developments and political developments in Eritrea) while at once unmasking the neocolonial effects of western debates over the possibilities of writing literary histories of indigenous people at all in a time when writing any history whatsoever is perceived as an ill-conceived and naïve gesture. In other words, the crucial impact of Negash’s literary history today is in its implications for a politics of decolonization and liberation in Eritrea, Africa, and beyond.