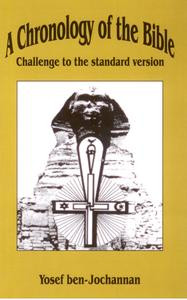 Among the many books written by Dr. Ben, A Chronology of the Bible (first published in 1972) is perhaps his most popular work. Originally prepared at the request of a group of Harlem-based ministers, Chronology documents the African origins of Judaism, Christianity, and Islam. Dr. Ben traces significant influences, developments, and people that have shaped and provided the foundation for the holy books used in these religions.

We are republishing A Chronology of the Bible in response to the constant demand from our readers for this little pamphlet. The BCP edition has been typeset and minimally edited to maintain the integrity and flavor of the original edition. The last entry in the Chronology is for 1973. Dr. Ben is presently working on the revised edition that will include versions of the Bible that have been published in subsequent years.