WHILE WAITING OR WORKING FOR CHANGE....Things to do and Pitfalls to Avoid in Eritrea, by Bereket Habte Selassie, With Translation in Tigrinya and Arabic 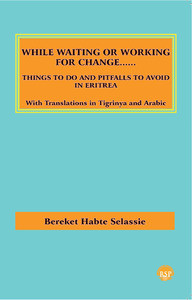 WHILE WAITING OR WORKING FOR CHANGE....Things to do and Pitfalls to Avoid in Eritrea, by Bereket Habte Selassie, With Translation in Tigrinya and Arabic

[In this book Dr. Bereket asks essential questions on the fate of Eritrea today…] “What is the role of civil societies and political parties? Should we pursue justice or peace and reconciliation? Is the role of the Diaspora to lead the movement or to support and encourage an Eritrea-based movement? Will we use the 1997constitution as our basis for change or focus on constitutionalism? That is, Dr. Bereket is not offering a blueprint for change as much as crystallizing the choices  and making an argument for debate—but only within the context of a united front, which he considers of paramount importance. Dr Bereket is saying, as Lenin did, we should step beyond “disunity, dissolution, and vacillation” and approach the existential threat Eritrea faces decisively.”

—Salah Younis (from the Foreword)

“This is an enormously valuable trigger for conversations that have to start happening in earnest everywhere—now—though some of the crucial choices Bereket identifies have third options that embrace both poles, for example, figuring out how to do peace and reconciliation with justice, as in South Africa or Argentina, and how to build on the 1997 Constitution by treating it as ‘interim’ and immediately setting about amending it instead of choosing it or not in toto. My one difference with[this book] is with [the] last proposal for what seems to me one more in a series of elite bodies set up to manage everyone else’s affairs, in this case comprised of an older generation who simply don’t have the credibility among or loyalty of younger people to be feasible. Whatever transitional authority is created, it will have to include those younger voices and experiences side by side with the older ones, and almost certainly some from the PFDJ as well some from an independent council, as well as the EDF and the NGOs. Bereket mentions civic and political organizations but only in terms of elders. I frankly think that won’t fly—and given the record of our generation, I’m not sure it ought to, unless the younger generation is firmly engaged in the processes of change. “

BEREKET HABTE Selassie is currently the William E. Leuchtenburg Distinguished Professor of African Studies and Professor of Law at the University of North Carolina at Chapel Hill.  Prior to this he served as Chairman of the Constitutional Commission of Eritrea between 1994 and1997. In recognition of his tireless work for democracy and human rights, Dr. Bereket was awarded the Honorary Doctor of Laws by Simmons College in May 2009. The internationally renowned jurist, academic and Pan-African activist continues to receive invitations to deliver keynote addresses in various forums in America, Europe and Africa.