THE MINES OF HIS MIND: Critical Reflections on the Works of Tayo Olafioye, Edited by Beth Virtanen and Sola Owonibi 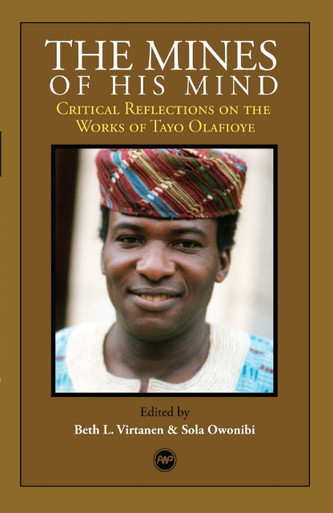 THE MINES OF HIS MIND: Critical Reflections on the Works of Tayo Olafioye, Edited by Beth Virtanen and Sola Owonibi

This book contains a rich deposit of ideas and the consequent social commentary that arise in the complete works of Tayo Olafioye in prose, verse and critical formats. By associating Olafioyes work with a mine, the editors hope to reflect the multiple connotations of such a device, for a mine could also be a metaphoric representation of a bomb that devastates. It is explosive, incendiary, death-laden and finally, in some senses, cleansing. In terms of poetry, a bomb from the mind of the writer is powerful and effective and could be, for example, atomic or nuclear as Olafioye himself suggests, or as suggested in other contexts a cement block in the words of Amiri Baraka or a grenade as Soyinka asserts. Each of these interpretations can be drawn as implications from the lessons that arise in contemplation of Tayo Olafioyes The Parliament of Idiots, A Carnival of Looters, Critic as Terrorists, Tomorrow Left Us Yesterday, Dining with The Spirits, A Stroke of Hope, My Heart Swims in the Tears of Happiness, The Thunder in a Woman, and other works.

This innovative book explores the complete works of Tayo Olafioye.... A notable name in the global literary terrain, Tayo Olafioye has about three scores of titles to his credit. This collection looks at how Olafioye started his creative writing career with publication of children stories in Nigerian national newspapers to becoming one of the most celebrated award-winning African writers. Olafioye has won the Golden Pen Award in San Franscisco, National Literary Award of America, and the Association of Nigerian Authors (ANA) SPECTRUM Award.

This book brings together for the first time a broad range of essays and responses to the works of this great writer. The fifteen essays, employing a variety of disciplinary perspectives, provide a detailed study of Olafioyes creativity, language use, and vision. Consequently, the book presents a unique collection of well-written essays by renowned and insightful scholars like Funso Akere, a foremost African linguist, Nwachukwu-Agbada, a renowned poet and professor of English, Beth Virtanen, a poet of international repute and professor of English, Mike Aliu, Henri Oripoloye, M.O. Ayola, Uriel Okunrinmeta, Busuyi Mekusi, Oluchi Igili, and Sola Owonibi.

ABOUT THE EDITORS
BETH VIRTANEN was formerly Director of the Department of English at the University of Puerto Rico at Mayagüez where she was also a professor of English. Her research interests include diaspora literature, Finnish-North American and Diaspora literature, and writing theory and pedagogy.

SOLA OWONIBI is a poet and a playwright and winner of 1996 Editor's Choice Award of the International Society of Poets, U.S.A. He teaches English at the Department of English and Mass Communication, Adekunle Ajasin University, Akungba-Akoko, Nigeria.