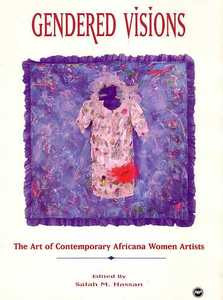 The first six essays contributed by Salah Hassan, Dorothy Desir-Davis, Bob Meyers, Diane Butler, and Florence Alexis, provide thoughtful as well as insightful readings of the artists' works in relation to their life stories, aesthetics, and socio-cultural background. They investigate intellectual projects and foreground the rick visual vocabularies created by these artists in their search for the most effective means of expressing their visions and ideological concerns.

The other two essays contributed by Olu Oguibe, and Freida W. Tesfagiorgis compliment the essays on the artists by providing a general theoretical background to the issues and concerns raised in the artists' works. They are thoughtful theoretical interventions in the ongoing discourse of feminism and art history from African and African American perspectives.

ABOUT THE AUTHOR
Salah M. Hassan is assistant professor of African and African Diaspora Art History and Visual Culture at Africana Studies and Research Center, Cornell University. He is the co-editor of The Muse of Modernity: Essays on Culture as Development in Africa (AWP 1996).