ELEM KALABARI OF THE NIGER DELTA: The Transition from Slave to Produce Trading under British Imperialism, Waibinte E. Wariboko 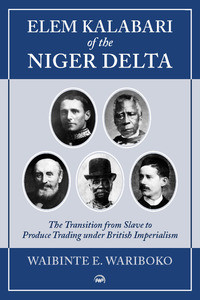 ELEM KALABARI OF THE NIGER DELTA: The Transition from Slave to Produce Trading under British Imperialism, Waibinte E. Wariboko

This book re-examines the multi-layered responses of Elem Kalabari to the agents of British firms, the consular officials of the British Crown, and the missionaries of the CMS Niger Mission that initiated, sustained and nourished British imperialism following the change from slave to produce trading during the nineteenth century in the Niger Delta. It challenges the popular notion that the eastern Delta trading states of Bonny, Nembe-Brass, Opobo, and Elem Kalabari had responded in identical patterns to the extraterritorial forces of British imperialism by, among other things, addressing the following questions:

Why did Elem Kalabari seek to continue with the trade in enslaved Africans after signing an anti-slave trade treaty with Britain in 1851?

What accounted for the longevity of Elem Kalabari as an export-import center in the Niger Delta after the fall of Akassa, Nembe-Brass and Bonny in 1922?

The answers provided by the author to these questions offer fresh light on how Elem Kalabari and its rulers, the merchant-politicians, responded to the forces of British imperialism; and they also debunk some generalizations about the eastern Delta states in the existing published literature. These answers further indicate clearly that the varying individual and group temperaments and psychologies that were exhibited from state to state in the eastern Delta, and even from time to time within the same state, also helped to determine how the various indigenous rulers responded to even the same stimuli from the forces of British imperialism from 1850 to 1950.

“This book represents a powerful re-emergence of the pioneer theme on trade and politics in Africa, but with an original twist: providing a careful focus on a major ethnic group, this blended transitional framework covers three centuries through an extensive grounding in data with copious notes. That the local context matters greatly is a core premise of this engaging narrative that shows the character of a trading nation, the morphology of the state it constructed, the specifics of concrete developments, and the role of participants and onlookers, both local and foreign, who shaped and were shaped by history.”

WAIBINTE E. WARIBOKO, in addition to numerous book-chapters and journal articles, has written  Planting Church-Culture at New Calabar: Some Neglected Aspects of Missionary Enterprise in the Eastern Niger Delta, 1865-1918; Ruined By “Race”: Afro-Caribbean Missionaries and the Evangelization of Southern Nigeria, 1895-1925; as well as Race and the Civilizing Mission: Their Implications for the Framing of Blackness and African Personhood, 1800-1960. He teaches African history at the Mona Campus of the University of the West Indies in Jamaica.