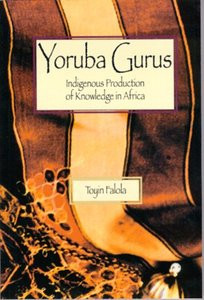 "Toyin Falola, one of the most prominent interpreters of Yoruba History, has written an outstanding and brilliant pioneer book that reveals valuable knowledge on African local historians. This is one of the most impressive books on the Yoruba in recent years and the best so far on Yoruba intellectual history. The range of coverage is extensive, the reading is stimulating, and the ideas are innovative. This is indeed a major contribution to historical knowledge that all students of African history will find especially useful. This original study will find itself in the list of the most important studies of the 20th century." -- Julius O. Adekunle, Monmouth University

In the quest to promote "universal knowledge" and create Western institutions in Africa, the intellectual contributions of Africans without university certificates or connections to the academy have been maligned, ignored or slighted. Yet, as Toyin Falola's book points out, there are African scholars and thinkers without academic credentials doing important works. Here is a book that shows that intellectual contributions need not be divorced from the concerns of local communities or deliberately promote narrative inequality and distance. The primary focus of the book is about the intellectual production of the prominent Yoruba intelligentsia outside of the academy. The academic mode has often privileged itself at the expense of other sites of production and voices. In this book, Toyin Falola analyzes the broad themes of the chroniclers who wrote in Yoruba and English and the contribution of the gurus among them. In addition, he presents a few selected texts to elaborate general and specific points.

ABOUT THE AUTHOR
Toyin Falola is a professor of history at the University of Texas at Austin. He is the former editor of the influential journal, ODU: A Journal of West African Studies, and was among the founding fathers of the Ife Humanities Society. He is the current co-editor of the Journal of African Economic History and the Series Editor of Rochester Studies in African History and the Diaspora. Among his recent publication are Development Planning and Decolonization in Nigeria and Violence in Nigeria.