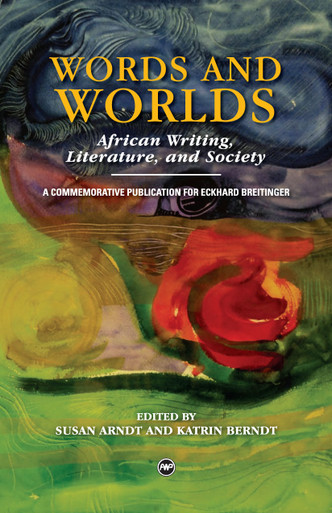 Western notions of cultural and social developments in African countries are still often fogged by age-old clichés and stereotypes born in the era of Transatlantic Slave Trade and colonialism. Those who choose to look beyond the myths will discover that literatures from Africa are a treasure; a complex marketplace with its many contradictions – a place of encounters and negotiations between public and private, learning and unlearning, the local and the global, and the ordinary and the exceptional. Writers ruminate about the worlds that move and challenge them. They focus on the details without losing sight of the big picture. Sometimes, writers leave the spaces most familiar to them – the spaces of fiction – and turn to critical writing, which they enrich with their poetic vision. The essays in this volume reflect this vision.

This collection of essays by African writers, dramatists, and theatre practitioners (such as Ezenwa-Ohateo, Nuruddin Farah, Femi Osofisan, Lewis Nkosi, Susan Kiguli, Zakes Mda, Alain Patrice Nganang, and Bole Butake), as well as some well-known German literary critics whose work focuses on Africa, reflects on the social, political, and cultural processes in Africa from historical and contemporary perspectives. In their discussions of women's writing, popular theatre, and the university, for example, the essays focus on difficult beginnings, crises, and potentials for cultural innovations. But they also examine the relationships between artists and audience, women and men, and Africa and Europe. A central concern of the volume is the encounter between Blacks and Whites which is explored extensively in discussions about the Apartheid system and post-Apartheid South Africa; racist experiences of Africans in Europe; and issues relating to exile, migration, and identity. The issue of European perceptions of Africa and its peoples, societies, and literatures are examined extensively. These essays that are wide-ranging thematically are united in a common concern about the role of fiction, theatre, writers, and artists in social, cultural, and political processes. They offer new interpretations and rare insight in their readings of African literatures.

This volume is dedicated to Professor Eckhard Breitinger, one of Germany's most prominent and finest scholars in the field of African literatures. The 'festschrift' is divided into four parts. The first part deals with historical and contemporary cultural developments in various African societies, focussing on how cultural institutions and African literatures respond to the challenges of globalisation against the background of recent historical developments. In the second part, the roots, aesthetic claims, and social function of the theatrical genre that is popularly known as “theatre for development” are discussed. The third section describes the challenges that writers face in African societies, how the challenges impact their work, and how they cope with them. Of special concern to these writers is the place of culture in the society. The essays of the final section reflect on transnational and transatlantic relations, particularly cultural conflicts between the hegemonial West and the 'Othered' Africa.

ABOUT THE EDITORS
SUSAN ARNDT studied English, German and African Studies at the University of London (SOAS) and Humboldt-University, Berlin, where she also received her PhD in 1997 as a student of Eckhard Breitinger. After being a Research Fellow at St. Antony's College in Oxford, Humboldt-University at Berlin and the Center for Literary Research (Berlin), she now teaches at the University of Frankfurt/Main. She published on feminism and gender in African literatures, intertextuality between orature and literature, exophony, and in the field of diaspora, postcolonial and critical whiteness studies.