WITNESS TO TRANSFORMATION: My Years at the United Nations, by Shola Jonathan Omoregie 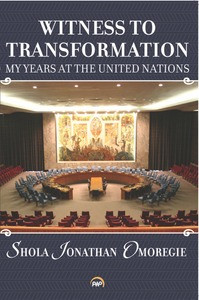 WITNESS TO TRANSFORMATION: My Years at the United Nations, by Shola Jonathan Omoregie

In this detailed, candid and illuminating memoir, Witness to Transformation: My years at the United Nations, Ambassador Shola Omoregie sheds light on a personal journey from childhood in Nigeria, through professional transition in the Nigerian Foreign Service to his eventual elevation as a top United Nations official. Ambassador Omoregie recounts the story of his youth with verve, sharing anecdotes of his birth in a polygamous home and of growing up in the homes of his maternal grandfather and uncle. He offers personal and direct accounts of the influence of the Nigerian civil war on his life, including many dangerous encounters when he was mistaken for a rebel soldier.

The memoir provides glimpses from the vantage point of someone who had seen action in the Front Line States in Southern Africa; of being at the heart of the United Nations Secretariat in New York at a critical time, including personally witnessing the inner dynamics of the Security Council; and of leading critical field assignments in Angola, Botswana and Guinea-Bissau, while also undertaking United Nations Ad Hoc assignments. It also offers lessons learned from his direct experiences as a United Nations expert and as a consultant for the African Union, to which he provided technical and political expertise during the establishment of its Peace and Security Council. This contribution, therefore, comes from someone who has observed developments at close quarters at the international level, including the transformation in the Security Council following the end of the Cold War.

This fascinating multi-disciplinary memoir will be of special interest to policy makers, students on a broad range of academic disciplines and others with interest in, and committed to multilateral diplomacy in a multifaceted international system.

“Witness to Transformation: My Years at the United Nations is a personal vivid account of a seasoned diplomat’s years of experience in a complex changing world. This book provides a powerful insight into the business of the United Nations. Certainly a must read for all interested in the intricate world of peace, security and diplomacy at the highest level”.

SHOLA JONATHAN OMOREGIE is founder and Chief Operating Officer of Africa Peace Support, LLC, an international political and security consulting firm with headquarters in New York. A retired career diplomat, Ambassador Omoregie had extensive experience spanning over three decades at the United Nations where he was an expert in Security Council affairs and peace operations. He retired from the United Nations after serving as the Special Representative of the Secretary-General in Guinea Bissau. Ambassador Omoregie was also a long-serving member of the Nigerian Foreign Service where he rose to the rank of ambassador. He served at various Nigerian diplomatic missions, including Beijing in China and London and Liverpool in the United Kingdom, where he was the Area Officer. He was educated at the University of Lagos, Lagos, Nigeria, where he earned a B.SC (Honors) in psychology. Born on 12 December 1946 in Benin City, Nigeria, he is married and has six children.