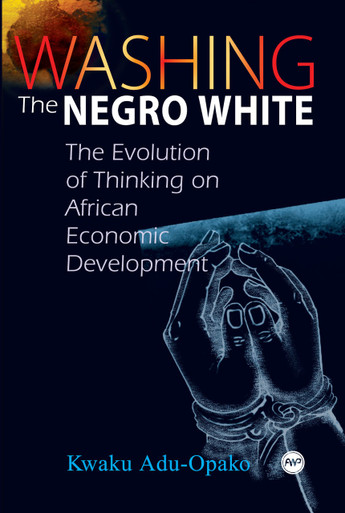 "Washing the Negro White" addresses the idea-historical recapitulation of the negative image of the African, which in the western concept of progress since the 17th century has been the focal point of his redemptive reconstruction. The crucial epistemological phases of such reconstruction are the concept of the Great Chain of Being, by which the enslavement of Africans was theologically justified, the theory of social evolution, which provided the intellectual justification for the western racist and colonial domination of African people, and the current and post-colonial concepts of social modernization to strip Africans of their cultural identity and render them to exploitation in the global economic and financial system. The phases harbor not only the evolution of the so-called African development crisis, but also that of the developmental sciences, which, once before a handmaiden to colonial exploitation in Africa and without paradigm self-emancipation from their past origin, purport today to be keenly interested in African development. The transfer of the colonial concept of reality into the modern time is contained in the theory of social evolution, which in the post-colonial era still continues to provide the intellectual perspective of modern African development. The African crisis therefore sums up to the failure of the concept of reality of the developmental sciences, which, in the modern time continue to draw on the colonial paradigm in redressing the problems of African development deriving from colonialism.

In the colonial period African development was equated to colonial development. The transfer of a colonial concept of reality into the post-colonial era, through the social evolutionary continuum of cultural tradition and cultural modernity, must accentuate the problems of African development that have their origin in colonialism. In the concept of social modernization, African development is viewed as before to be how to dismantle the socio-cultural phenomena on the continent, to be replaced by a pale copy from the former colonial masters. The disastrous consequence of post-colonial modernization is that the strategies evolve around a formula according to which developed is that which is modern and modern is that which is imported. This formula encapsulates the African crisis in all its dimensions. With the African developmental landscape reduced to an experimental field for alien ideas and concepts, development bypass the cultural reality of the continent and reduce the majority of the African population to become passive onlookers in the process. A development adapted to African cultural traditions and way of life has therefore been aborted and the colonial psychological complex of inferiority-superiority has been substituted for and intensified by the new concept of cultural tradition-modernity. The economic, social and political ramifications sum up to the African crisis, which is not likely to be minimized owing to the exogenously dominated framework of African development.

The salutary message for the African continent is obvious. Over the long period of its intrusion into the continent, the western concept of progress has victimized Africans and rendered them vulnerable in a hostile global system. Unless Africans redefined and filled the content of their development with adequate consideration for the cultural reality on the continent, the so-called African crisis will persist and intensify to threaten the very existence and survival of Africans.

About the Author:
KWAKU ADU-OPAKO is the Director of the Outreach Centre for Development and Cooperation at the Presbyterian University College at Abetifi-Kwahu in Ghana. Dr. Adu-Opako studied Economics at the Faculty of Economics and Business Administration of the Bergische University of Wuppertal in Germany, where he received his PhD in 1991 and taught Development Economics. He was also Tutor at the Centre for Area Orientation of the German Foundation for International Development (ZA/DSE) in Bad Honnef in Germany. From 1994 to 1997 he served as Senior Lecturer at the Department of Economics at Ahmadu Bello University in Zaria, Nigeria.