WALTER RODNEY SPEAKS: The Making of an African Intellectual, Edited by Robert Hill 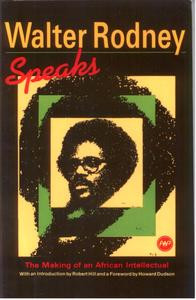 WALTER RODNEY SPEAKS: The Making of an African Intellectual, Edited by Robert Hill

In 1974, Walter Rodney, author of How Europe Underdeveloped Africa, The Groundings with My Brothers and other works, visited the historic institute of the Black World in Atlanta, Georgia. With the institute's members, he discussed his own political and intellectual development and exchanged views on the role of the black intellectual. Her talked at length about the dramatic struggles taking place in southern Africa and about the political economy of African American society. This special book grew out of that dialog, which was never resumed because of Rodney's politically motivated assassination in his native Guyana.

Walter Rodney lived with and among black and progressive peoples on four continents and in several areas of the Caribbean. He worked in all these contexts as a historian, university teacher, popular lecturer, social critic and political theorist, and he was an unswerving advocate of the oppressed and exploited classes, especially those of the black world. He was actively involved in the global struggle for freedom... In this work of sustained reflection, Walter tells us in his own words how he came to be the person that he was. He reflects on the nature and meaning of his life at a critical juncture in his career. ...He also discusses his view on the leading political and social trends in Africa, the Caribbean and Black America during the mid-1970s--a period of critical shifts in Pan-African and world affairs. For all who seek to continue "grounding" with this brother, this work is essential.
-From the Introduction by Howard Dodson
Chief, Schomburg Center for Research in Black Culture, New York Public Library

Walter Rodney delivered many hundreds of speeches. One day, we hope, a selection of those speeches that survive will be made available. The present work will fulfill its purpose if it contributes toward that goal by providing the public with a small but significant example of Walter Rodney's incomparable intellectual penetration, a gift he eloquently employed in order to make the most complex political and historical subjects fully comprehensible to a popular audience.
-From the Foreword by Robert A. Hill
Editor, Marcus Garvey Papers at the University of California at Los Angeles