WALKING A TIGHTROPE: Towards a Social History of the Coloured People of Zimbabwe, by James Muzondidya 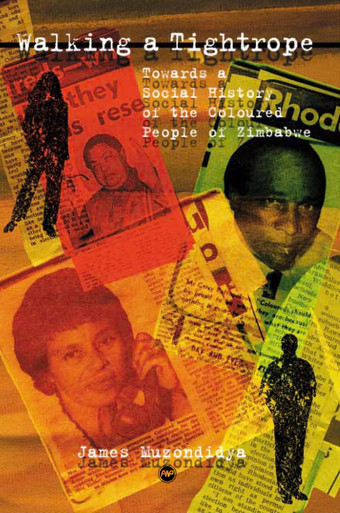 WALKING A TIGHTROPE: Towards a Social History of the Coloured People of Zimbabwe, by James Muzondidya

This book examines the history of the Coloured or mixed race community of Zimbabwe, a group that has not only been marginalized in most general political and academic discourses but whose history has also been subject to popular misconceptions. The book focuses mainly on the process of identity formation among members of the community and the development of political ideologies and strategies within the same community. Challenging conventional wisdom on race and ethnic identities, this book argues that understanding the process of identity formation among members of the Coloured community requires transcending two approaches: essentialism, based on the notion that Coloured identity is a biologically determined, inherent quality derived from miscegenation, and constructivism, which projects Coloured identity and any other identities of subject groups as simply inventions of the colonial state in which the subjects themselves played no active part in the formational processes.

While this book focuses on the Coloured community, its overall observations have a broader significance than the group it focuses on. Through its critical analysis of political developments within the Coloured community and detailed examination of the various influences in the mobilization of Coloureds in the national protest movement, the book not only manages to highlight problems encountered in building a national consciousness among the various interest groups in colonial societies, but also to unravel the contradictions in African nationalism. Focusing specifically on the relationship between African nationalism and Coloured identity, the book also explores in detail the ambiguities of both Coloured social identities and African nationalist ideologies and some of the ideological and strategic shortcomings of Africas past and present nationalist movements movements, the most apparent being the lack of tolerance or a proper discussion of the problems of race and cultural diversity.

When viewed in the broad perspective of studies which focus on identities in general, this work is one of the few that clearly tries to demonstrate how social identities are produced and reproduced in the dialectic of internal and external definition while paying adequate attention to the role played by the people themselves in the identity formation process. Yet, in emphasizing self-identification, the book does not seek to wholly diminish the importance of the state in the whole process.