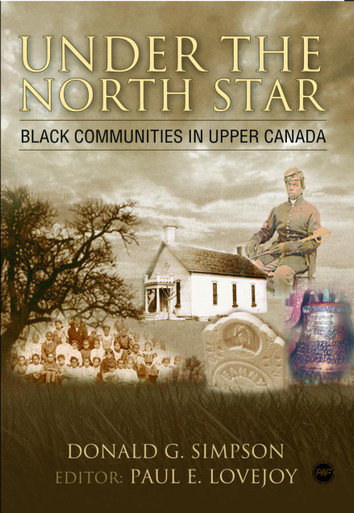 Donald Simpsons study of the black communities in Upper Canada before 1867 contributes to our understanding of how the Underground Railroad (UGRR) undermined slavery in the United States. Based on detailed research, Under the North Star  Black Communities in Upper Canada examines what happened to black refugees once they arrived in Canada. Fugitive slaves and free blacks alike fled to Canada, especially after the Fugitive Slave Act of 1850, and in making this move, they revealed the intense resistance to slavery and racism in North America. Like the maroons, cimarones, palenque, and kilombo in the Caribbean, Hispanic America and Brazil, the black communities of Upper Canada asserted their dignity through their independence, hard work, and persistence in maintaining sanctuaries from slavery. As Simpson demonstrates, many Canadian blacks returned to the US to fight in the Civil War, demonstrating clearly a strong commitment to freedom and justice for all people.

About the Author:
DONALD G. SIMPSON received his Ph.D. from the University of Western Ontario in History, and subsequently was involved in Crossroads Africa, and later with the establishment of the International Development Research Centre (IDRC). He was the first regional director in West Africa of the Canadian University Services Overseas (CUSO). He has been Director of International Business at the Ivey School of Business, University of Western Ontario, and in that capacity helped establish the Faculty of Business Administration at Tsinghua University in China. Dr. Simpson has lived and worked in over 70 countries, and has been involved in mentoring numerous develop oriented companies and NGOs. Since 1991 he has been director of Innovation Expedition, a virtual global network organization.

About the Editor:
PAUL E. LOVEJOY is Distinguished Research Professor in the Department of History at York University in Toronto, and is a Fellow of the Royal Society of Canada and holds the Canada Research Chair in African Diaspora Studies. He is currently Director of the Harriet Tubman Resource Centre on the African Diaspora and is also Research Professor, University of Hull in England.