UGANDA SINCE INDEPENDENCE: A Story of Unfulfilled Hopes, by Phares Mutibwa 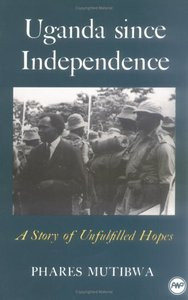 UGANDA SINCE INDEPENDENCE: A Story of Unfulfilled Hopes, by Phares Mutibwa

Early in the twentieth century, Winston Churchill called Uganda the 'pearl of Africa'. It became independent from British colonial rule in 1962 amid high hopes on all sides. Yet from the mid-1960s onwards, and most spectacularly after the seizure of power by army chief Idi Amin in 1971, the country plunged into an orgy ethnic violence, wholesale disregard for the rule of law, and economic chaos - hardly alleviated after the fall of Amin and return to power of the country's first President, Milton Obote, and the latter's overthrow and replacement by the Okellos. Under the National Resistance Movement led by Yoweri Museveni, the country - exhausted, impoverished and demoralized - has begun a move backwards towards constitutionalism and democracy.

The author of this book is a former head of the department of History at Makerere University, and at the time of publication is a member of Uganda's Constitutional Commission. His immediate family suffered during the country's years of strife on a scale that that recalls European Jewish families during the Nazi Holocaust. He has therefore approached his task of recounting and analyzing the history of Uganda since independence 'as it really happened' with the agonizing knowledge of an insider, and with the passionate ideal of service to his fellow Ugandans. For, he argues, if they cannot achieve a sympathetic as well as a coherent understanding of the roots of the ills that have plagued their country since independence, there can never be reconciliation and reconstruction.

The account begins with a survey of the country's history before independence, and ends with an analysis of the Museveni years - calmer than the preceding two decades but still checkered - during which efforts have been made internally to put Uganda back on the right track and to recover its former character. The book has been long in preparation, and will now be welcomed for its clear-sightedness and honesty.

Phares Mukasa Mutibwa was born in July 1936 in Bulemezi county, now part of Luwero district in the former Kingdom of Buganda, and educated at Ndejje Secondary School, King's College Budo and Makerere University. He served as a diplomat at Uganda's Foreign Service for two years, before joining Makerere University as lecturer in history. After obtaining his Ph.D. at the University of Sussex, England, he was promoted to a senior lectureship at Makerere, and was Professor and Head of Department of the History Department there in 1976-7 and 1979-83. He has served as professor at the Universities of Nairobi and Swaziland. He was Director of Research and Political Affairs in the National Resistance Movement (the ruling party in Uganda, since 1986) and is currently a member of the Uganda Constitutional Commission.

Besides articles in learned journals, Professor Mutibwa is the author of "The Malagasy and the Europeans" (Longman, 1974) and "African Heritage and the New Africa (East African Literature Bureau, 1977) and co-author of "A Century of Christianity in Uganda, 1877-1977" (Uzima Press, 1978). Since 1975 he has been a member of UNESCO's International Scientific Committee for its "General History of Africa", contributing a chapter on Madagascar to volume VI.