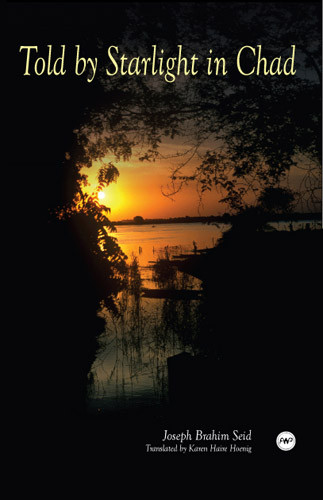 "In the evening, there are traditional games. Excitement fills the air; a tumult is unleashed. The drums reverberate, roar, summon to the dance. Their staccato boom echoes through the savannah and over the rolling, sandy hills. The young perform war dances, competing in strength, agility and skill. Simulating combat, they brandish their assegais, crouch, rise up and face off in rapid succession. They stamp the ground furiously with their feet: a cloud of dust envelops them in a tremendous halo of glory. All this time, the tom-toms are vibrating, their frenzy marvelously matching the dancers movements. Rhythm of life, captivating, lyrical, spellbinding magic! With fertile, protean imagination, griot and bard recite the prowess and deeds of their distant ancestors or sing of the beauty and charms of their betrothed."

Romantized scenes from Seid's boyhood, like the festival depicted here, as well as stories from the golden age of empires and other timeless tales in this collection evoke positive images of Chad and Africa more generally. African readers, young and old, regardless of locality, will hear echoes of the folktales, fables, and legends narrated by their grandmothers of an evening under the stars or by the fireside.

In the literature classroom, at secondary and tertiary level, Seid's imagery should resonate and appeal to the sensibilities of African learners from similar socio-cultural and historical environments. This same imagery can, in turn, be used to introduce non-African learners to Africa. On a continent grappling still to forge new beginnings out of hope and deep despair, cruelty and great humanity, reminders of the past that evoke positive affect and historical figures and events that inspire a sense of pride about being African can enhance endeavor.

ABOUT THE AUTHOR
Born in NDjamena, Chad in 1927, of Sara Gor-Bulala parentage, JOSEPH BRAHIM SEID received his primary education in French colonial schools in NDjamena and Braazaville, Congo and secondary education in Cairo, Egypt. He obtained a BA in Law in Lyons, France, distinguishing himself as Chads first university graduate in 1955. A career magistrate, Seid is remembered mainly for his public roles. He served as Chads first Ambassador to France at independence from 1960-66 and in the Ministry of Justice from 1966-78.

ABOUT THE TRANSLATOR
Karen Haire Hoenig, originally from Ireland, completed her doctorate at Teachers College, Columbia University, New York in 2003. She is currently doing postdoctoral research at North-West University in Potchefstroom, South Africa. Her research interests include African stories/literature and culturally relevant education.