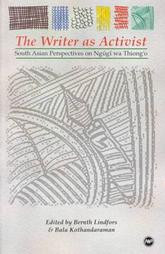 Ng?g? wa Thiong'o writes about a world that South Asian readers recognize as analogous to their own, and he expresses ideas with which they can readily identify. His treatment of the struggle against colonialism and neo-colonialism, his firm adherence to a radical ideology, his views on religion, his broad humanistic vision, and his decision to write in his mother tongue won him avid followings among students and teachers in India, Pakistan, Bangladesh and Sri Lanka. In these, as in other parts of the former British Empire, he is admired as an effective protest writer and an influential social theorist. His novels, plays and essays are read with great interest and careful attention.

The essays collected here offer a sample of how his works have been interpreted by South Asian literary scholars. Two interviews recorded during his visit to India in February 1996 are also included.