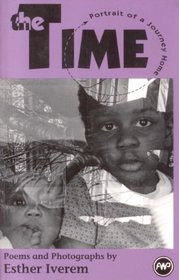 "The Time: Portrait of a Journey Home powerfully captures the complexities of what it has meant for an urban, educated intelligent and sensitive African American woman to come of age in the 1970s and 1980s. It is refreshing that someone of Iverem's breadth, insight and love of words has provided a poetic document of life for an as-yet-unlabeled, unchronicled group-- those of us a shade too young to have been 1960s black power nationalists and a shade too old to be 1990s post-soul searchers. Finally, someone has given voice to our sandwiched-in struggles. She has an ability to write political poetry and not fall prey to rhetoric and redundancy. Her work has range that reflects a genuine complexity, depth and diversity of thought. She does it so well-- that blending of emotion and activism, of profoundity spoken softly, of rage funneled through reflection. This book is a brilliant beginning, a rightful place of departure for a young woman determined to mine her way through the forest in order that we might see more clearly. We're going to hear more from this writer in that quietly strong voice-- forever brash, forever thoughtful." -Bridgett M. Davis, Assistant Professor at Baruch College, New York, NY

"The 1980s was a decade of social regression and right wing aggression. In literature and the arts, solipsism and self-indulgence had a heyday. But fighting through the 1980s comes the light of socially responsible writing and art-making of the 1990s. Esther Iverem, young African American woman writer, is one the light-bears, committed to an aesthetic of innovation, justice and struggle. Her words bite, purr, snarl, scream, shout, spit, soar, sing and hit with skilled ferocity of a master marital artist. You don't quite know what hit you." -Fred Ho, Composer, Bandleader, Saxophonist, New York, NY