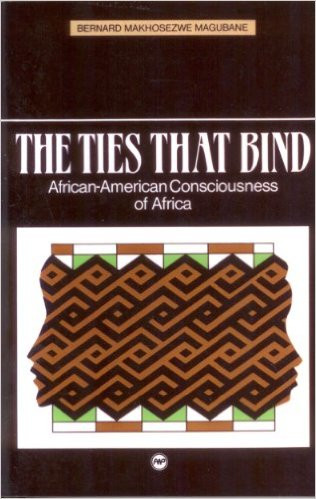 "Ben Magubane's book represents a giant and magnificent step towards illucidating the total reality of Black people in America. It is the beginning of the end of mystification. With the grandeur of a DuBois, Magubane decisively demonstrates how objectively and subjectively the struggle of Black Americans to capture their place in the sun of history is ineluctably linked to the liberation movement of Africa, especially Southern Africa. Because it takes us beyond "Roots," The Ties That Bind is a book which should be passed on from generation to generation of Afro-Americans and all progressive minded people." Prexy Nesbitt, Community Relations, Mayor's Office, City of Chicago

"With this book, Ben Magubane examines the basis for the historical roots of internationalism and Pan-Africanism in Black communities throughout the USA. When Europeans invaded Africa and initiated the slave trade, they set in motion the seed of one of the most important problematics of our time... the role of the African diaspora in the development of the US imperialism. Magubane's book carefully examines this problematic in the context of world history and provides new insights into the complex relationships between Africans and those of us in the diaspora. To understand the "Free South Africa Movement" today you must study this history of The Ties That Bind."-Prof. Sylvia Hill, University of the District of Columbia, Member-Free South Africa Movement

"Magubane has long shown a unique facility for critically interrogating the ideological premises embedded in western thought and social sciences. In that sense, his work has always concerned itself with the historical opposition between Africa and the West. In the present work, he applies his considerable knowledge of this subject to a related but entirely different subject: the significance which Africa has had for the development of Afro-American consciousness and identity. This is a subject of immense importance and urgency since upon the relationship between Africa, America and the Black American may turn the political and spiritual future of the West. This work extends the inquiries into what DuBois characterized as the 'last battle of the West'." -Cedric Robinson, Author, Black Marxism

"In The Ties That Bind Bernard Magubane offers a magnificent and scholarly analysis of the Afro-American consciousness of Africa and its consequences for Black self-knowledge, pride and nationalism in America. At the time when the image of Africa in the US media is that of a continent ravaged by wars and starvation, this book explains not only the historical and sociological context in which racist stereotypes and distortions concerning Africa and peoples of African decent can be understood, but also the political conditions for superseding them."-Nzongola-Ntalaja, Howard University