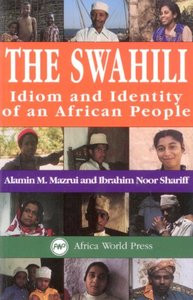 "Among the African peoples, the Swahili are unique in at least one respect, for it is about them more than any other people, that the question is perennially asked: who are the Swahili... The answer that the authors provide to this staple of scholarship about East African is subtle, complex, well-informed and may prove decisive in settling such interrogations for the perspectives they bring to bear upon this vexing question are original, wide-ranging and persuasive." -Aijaz Ahmad, Professorial Fellow, Nehru Memorial Museum and Library, New Delhi

"In this work, Professors Ibrahim Noor Shariff and Alamin M. Mazuri have combined their narrative understanding of Swahili culture, language and people with a meticulous research methodology: the result is a pioneering study that will be of inestimable value alike to policy makers in the region. This is must reading as well to the Africanist community in Europe and North America." -Said S. Samatar, Professor of History, Rutgers University

ABOUT THE AUTHORS
IBRAHIM NOOR SHARIFF holds an Ed.D. from Rutgers University and a D.F.A. from Makerere University of East Africa. He is a professor of Kiswahili language and literature; he is also an artist and a poet. Dr. Shariff is the author of Tungo Zetu (RSP, 1998). As an artist he has held many exhibitions, the most recent one in 1994 in Muscat, Oman.

ALAMIN M. MAZURI holds a Ph.D. in linguistics from Stanford University. He is an associate professor of African Literature and Coordinator of the African Languages Program in the Department of Black Studies in Ohio State University, Columbus. He has published widely int he interrelated areas of social linguistics and the o=politics of literature in Africa. He is also a playwright. His forthcoming book, Swahili Society and the State, is co-authored with Ali A. Mazuri.