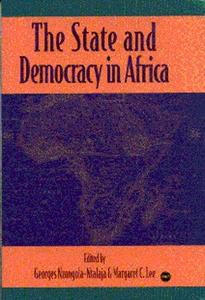 This book is a study of the issues of democracy and democratization in Africa, with emphasis on the roles of civil society and the state in the democratic transition. After clarifying the meaning of democracy as a universal principle of governance and the applicability of the concept in Africa, the book examines the major problems facing the democratic transition on the continent as a whole.

More than half of the contributions to the volume are devoted to a critical assessment of the role the state plays in promoting, undermining, or blocking the democratic transition. There are three case studies on South Africa, four on Nigeria, and one each on Ghana and the Portuguese-speaking countries.

The book concludes with two studies on democracy and human rights, with the first looking at the issue in a broad historical and international context, and the second focusing on the gender bias of "ombudsman" institutions in Africa.

ABOUT THE AUTHOR
GEORDES NZONGOLA-NTALAJA is Professor Emeritus of African Studies at Howard Univeristy in Washington D.C., and an international development consultant. He is former President of both the African Association of Political Science (AAPS) and the African Studies Association (ASA). His publications include The Crisis in Zaire: Myths and Realities (1989).

MARGARET C. LEE is currently a member of the Executive Committee of the African Association of Political Science (AAPS) and a Scholar in Residence at American University in Washington D.C. She is the author of SADCC: The Political Economy of Develoment in Southern Africa (1989).