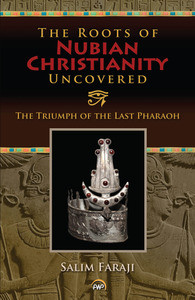 The history of Late Antique Africa and the origins of Nubian Christianity have received little attention by Africanists and have been virtually ignored by Africana historians.  For Nubiologists, church historians and scholars of late antiquity the story of this ancient African civilization and its conversion to Christianity has been primarily understood as an addendum to Greco-Roman classical antiquity thereby positioning ancient Nubia during late antiquity as a passive receptacle of culture as opposed to a historical actor emerging through the cultural anteriority of its own religious traditions.  Ancient Nubia was at once a Nile Valley and Sudanic civilization. Its history extended beyond the founding of Dynastic Egypt and Napatan-Meroitic Kush—and equally significant, is the fact that long after ancient Egypt had been subdued by the Ptolemies and Rome, ancient Nubian civilization continued to thrive in late antiquity as an independent kingdom, first as a classical pharaonic culture and then as a Christian polity until the 15th century.

The Roots of Nubian Christianity Uncovered: The Triumph of The Last Pharaoh: answers the questions: how and why did ancient Nubia convert to Christianity during the 4th – 6th century CE?  The book demonstrates that it is no longer acceptable to argue that Nubia converted to Christianity in the sixth century CE due to Byzantine Missions, but that a little known monarch, the Nubian king Silko who ruled in the 5th century inaugurated the beginnings of Christianity in ancient Nubia.  King Silko was in fact the Last Pharaoh in the Nile Valley and the first Christian king of Medieval Nubia.  The Nubian Pharaoh Silko was to ancient Nubia what Constantine was to Rome and the legend of King Arthur was to Britain, a founding Christian monarch and a transitional historical figure.

Nubian sovereign religion in the fifth century CE was an amalgamation of Classical Sudanese and Egyptian traditions, Meroitic imperial culture, Christian traditions indigenous to Coptic Egypt, and Roman military piety.  By utilizing contemporary African and African diaspora religions and applying methods that are traditionally employed in contemporary studies of conversion in Africa and the African Diaspora The Roots of Nubian Christianity Uncovered highlights the themes of cultural complexity and multiple religious identities in late antique Nubia.  It will become clear that like other forms of African Christianity that have been shaped by African traditional religions and culture Nubian Christianity was fundamentally African. Therefore conventional views about religious conversion that privilege “Pagan-vs-Christian” dichotomous discourses are incorrect and seek to limit indigenous perspectives that upset Christian triumphalism.

SALIM FARAJI is Associate Professor and Chair of Africana Studies at California State University, Dominguez Hills. He completed his Master of Divinity at the Claremont School of Theology and M.A. and PhD at Claremont Graduate University. He is a member of the International Society for Nubian Studies and specializes in early Christian history, Africana and Africanist historiography, Coptic Studies and the Sudanic, Napatan, Meroitic and Medieval periods of Nubian history. Professor Faraji is a contributor to the Encyclopedia of African Religion and the Oxford Dictionary of African Biography and is co-author of The Origin of the Word of the Amen: Ancient Knowledge the Bible Has Never Toldand The Plan: A Guide for Women Raising African American Boys from Conception to College.