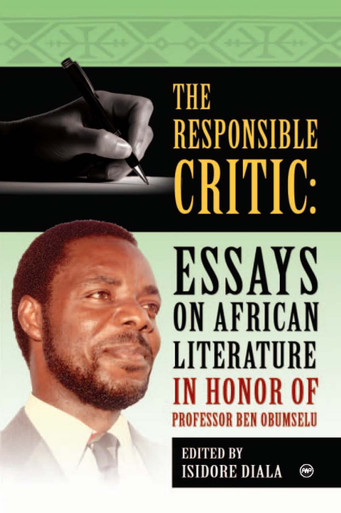 The Responsible Critic is a critical anthology offered as a tribute to a founding father of African literary criticism, Professor Ben Obumselu. The collection of seventeen scholarly articles examines the state of literary studies in Africa (with particular emphasis on Nigeria) and covers a period spanning well over a hundred years of creative writing in Africa.

Diverse in its preoccupation and critical methodology, the book primarily engages with the implication for African literature (and general cultural and intellectual life) of the contact between Africa and the West, and the paradoxes and complexities of the transition from precolonial to postcolonial praxis. It foregrounds the abiding and changing concerns of literary theory and criticism in Africa.

With a foreword by Molly Mahood, a testimony of the beginning, and contributions by accomplished scholars drawn from Denmark, England, Nigeria, South Africa, the United States of America and Zambia, the book presents the work of several generations of critics of African literature. Its concerns range from nineteenth century Anglo-Nigerian poetry to the prose fiction of postapartheid South Africa, and in the process it engages with the work of most of Africas important writers.

ABOUT THE EDITOR
ISIDORE DIALA received his Ph.D. in English from University of Ibadan, Nigeria. He was Guest Researcher at the Nordic Africa Institute at Uppsala, Sweden in 2001. He is an award-winning poet and dramatist with two critically acclaimed books, The Pyre and The Lure of Ash to his credit. Dr. Diala currently teaches in the Department of English at Imo State University, Owerri, Nigeria.