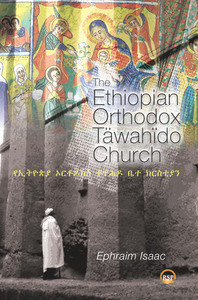 Ethiopia is an extraordinary symbol of continuity amid a restive and crisis-ridden world. In a few decades, Africa has passed from colonialism, to modernity, to a congress of now largely independent black powers, whose views and votes are at long last heeded on the floor of the global parliament of nations. The capital of Ethiopia is also the headquarters of both the United Nations mission to the continent and of the indigenous continental African union.

Ethiopia is unique, not only in the antiquity of her continuous religious and political history, but also in the ever accelerating involvement of the nation in the problems and the promises of continent where religious belief is nevertheless more radically diversified. The sanctions of peace, hospitality, and wisdom in the line of biblical King Solomon is a symbol of continuity, order, and resoluteness alike for the community of nations, for the continent of Africa, and for the church and citizenry of Ethiopia itself.

This book sketches the history of the Ethiopian Orthodox Tawahido Church and also that of Christianity as a whole in Ethiopia. As the reader will discover, not only are there strong Biblical Hebraic elements in the theology, political theory, and liturgical calendar of the Ethiopian Church but there is also a strong influence from Beta Israel and Ethiopian Jews. Besides these Ethiopian Jews and of course, the Orthodox Ethiopians and a few Protestant and roman Catholic Ethiopian Christians, there are in Ethiopia also very large numbers of Moslems and various native beliefs. We hope other volumes will follow on these equally important Ethiopian religious traditions.

"A very comprehensive analysis of the history, tenets, organisation and influence of the Ethiopian Orthodox Church by a renowned authority on the subject. We are all indebted to Professor Ephraim Isaac for this important new contribution to Biblical and Ethiopian Studies. It is fascinating to learn, from Professor Ephraim, that Ge'ez, or classical Ethiopic, was one of the first seven languages of the ancient world to receive the holy scriptures."
-Professor Richard Pankhurst

ABOUT THE AUTHOR
EPHRAIM ISAAC, BD (Harvard Divinity School '63), Ph.D. (Harvard University '69), D.H.L. (CUNY), D.Litt. (AAU), is a founder and the first professor of the Harvard University Department of African & Afro-American Studies, created in 1969. The Harvard Department has established the Ephraim Isaac Prize for Excellence in African Languages. Ephraim is author of numerous scholarly works about the Late Second Temple period and Classical Ethiopic and Yemenite Jewish religious literature. He is Director, Institute of Semitic Studies, Princeton NJ, Chair, Board of the Horn of Africa Peace & Development Committee, and President Emeritus, Yemenite Jewish Federation of America. He has taught at Hebrew University, Princeton University, University of Pennsylvania, Bard College, and other institutions of higher learning. He has received many honors, including the Tanenbaum Center for Interreligious Understanding 2002 Peacemaker in Action Award, honorary degrees from John J. College of Cuny, Addis Ababa University of Ethiopia, NEH Fellowship, among others. He knows seventeen languages, lectures widely on the subject of "Religion & Warfare," "Religion & Hate," etc. and sits on Boards of some twenty-five international religious, educational, and cultural organizations.