THE DIALOGUE OF CIVILIZATIONS: The Self and the Other, by Mana Saeed Al Otaiba, Translated by Moha Ennaji and Fatima Sadiqi 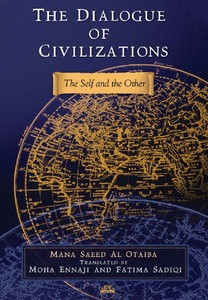 THE DIALOGUE OF CIVILIZATIONS: The Self and the Other, by Mana Saeed Al Otaiba, Translated by Moha Ennaji and Fatima Sadiqi

This book is a contribution to Arab-Muslim-Western dialogue. The book underlines the hazardous consequences of the strategy of preemptive war on this dialogue. According to the author, Samuel Huntington’s Clash of Civilizations has provoked a needless tension among peoples who are naturally keen on their cultures in this globalizing world. The book also stresses the importance of intra- and inter-Arab dialogue, which can foster tolerance, coexistence, and world peace.

The introduction deals with conceptual and terminological issues related to the notions of “dialogue” and “civilization”, and their close link with relevant terms such as “citizenship” and “culture”.

The second part, titled “Obstacles and Dialogue”, is concerned with the study of subjective and objective obstacles to dialogue among civilizations. It debates about the external challenges faced by Arab nations, and the conflict of interests and socio-economic inequity in the Middle East and North Africa.

The third part, which is titled “Spaces and Horizons of Dialogue”, is devoted to the vital role of science and knowledge in the institutionalization of dialogue. This part also discusses the central place of economic development in promoting mutual understanding and dialogue among nations, namely in the fields of industry, agriculture, tourism, and education.

ABOUT THE AUTHOR/TRANSLATORS
Mana Saeed Al Otaiba obtained his PhD in 1976 from the University of Cairo with distinction and first class honors. He has published many books in Arabic, the most important of which are Oil and the Economy of the United Arab Emirates (1889), Arabism and Globalization (2000), and Dialogue of Civilizations (2003), which has been translated into English and French. Dr. Mana Saeed Al Otaiba is also a well-known poet and successful businessman.

Moha Ennaji is Professor of Linguistics and Cultural Studies. He was the Head of the English Department at the University of Fès, Morocco (1988-1994). He is currently the Director of Arabic Studies at Rutgers University in New Jersey, USA. He has published extensively on language, education, gender, migration and civil society. His most recent books are: Multilingualism, Cultural Identity, and Education in Morocco (2005), and Migration and Gender in Morocco (co-authored with F. Sadiqi, Red Sea Press, 2008).

Fatima Sadiqi obtained her Ph.D. from the University of Essex in 1982. She is Professor of Linguistics and Gender studies. She has published several books and articles in the areas of language, gender, and women’s issues. She is the author of Women, Gender, and Language in Morocco (2003). She was a fellow researcher at Harvard University (2006-2007), and is currently Director of the Spirit of Fès Foundation.