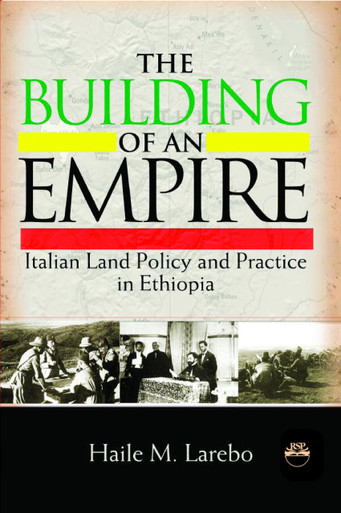 Italys longstanding aspiration for a place in the sun was materialized by the Fascist leader, Benito Mussolini, whose greatest achievement was perhaps the conquest of Ethiopia in 1935-36. The focus of this carefully researched book is the economic policy and practice of Italy during its six years of occupation of Ethiopia. Larebo explores the way in which the invaders tried, and miserably failed, to turn their cherished prize to the economic advantage of metropolitan Italy. The Italian experience is developed against the backdrop of Ethiopias modernization effort in the early twentieth century and in a comparative context with other relevant European colonial policies elsewhere in Africa.

Based on an impressive range of documentary material, the book is one of the first archive-based monographs about any aspect of land tenure and agricultural modernization in the twentieth century. This is essential reading for all Ethiopianists as well as students concerned with land policies and agricultural development or interested in comparative colonialism and imperialism in the twentieth-century Africa and the world.

Haile Larebo, a readable writer, is a good economist, and an able historian and political scientist.  His book is on the whole well produced. It makes considerable use of hitherto little worked archives, and is a valuable contribution to the economic history of occupation, as well as to our understanding of Italian fascist colonial policy and practice.

The book is the most serious attempt to date to evaluate Italian colonial policy, and it will remain a major study for the future. It is well written, logically argued, and provides good documentation.

Haile M. Larebos book is a tour de force in the use of Italian archives on Ethiopia. His exploration of records is thorough and insightful.  Overall, Building of an Empire is a significant move forward in our understanding of the Italian occupation and should be required reading for anyone contemplating a foray into the riches of Italys archives.

ABOUT THE AUTHOR
HAILE M. LAREBO is Associate Professor of History at Morehouse College in Atlanta, Georgia. He obtained his PhD in history at the School of African and Oriental Studies of University of London. He was a Rockefeller fellow at the North Carolina Humanities Center and an awardee of the National Endowment for Humanities Grant. Several of his articles on Ethiopia have been published in scholarly journals around the world.