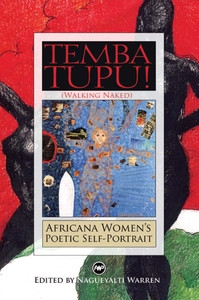 The poems assembled in this anthology center on Black women’s consciousness: self definitions, their questions regarding the complexities and contradictions of race and gender, their spiritual and inner lives, and their search for Truth. Many of these poets write to subvert and deconstruct the wicked popular representations of themselves by others. Some of the poems are overtly political while others are not. Some poets use formal prosody, while others do not. However, they all reveal the poets’ philosophy and the common issues that connect Africana women throughout the Diaspora.

Temba Tupu!: The Africana Woman’s Poetic Self-Portrait is voluptuous, politically sassy, celebratory, and fearlessly revealing in its truth-telling as its contributors allow their poems to walk naked among us. Using a gynocentric pan-African angle of vision brilliantly, Nagueyalti Warren has gathered in a single volume the writing of more than three hundred Africana women poets from every corner of the Diaspora and has organized their poems in a way that reflects their rites of passage from girlhood to womanhood, the relationships that test and temper their identity, and the women who have inspired them along their journey. Temba Tupu! will be a treasured collection of Africana women’s poetry for years to come.

ABOUT THE EDITOR
NAGUEYALTI WARREN, Ph.D., MFA, is Senior Lecturer in the Department of African American Studies at Emory University. She is winner of the 2008 Naomi Long Madgett Poetry Award for her volume Margaret Circa 1834-1858. Coeditor of Southern Mothers: Facts and Fictions in Southern Women’s Writings (LSU press 1999), Warren has contributed numerous critical essays and book chapters on African American literature and women’s writings in particular. She is a Cave Canem fellow, Summer Poetry in Idyllwild fellow and a member of the Atlanta-based Baobab Poetry Collective.