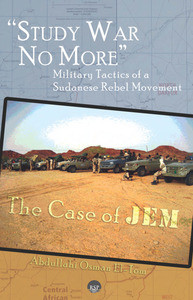 This book offers a fascinating study of certain aspects of asymmetrical warfare in Africa, an angle rarely covered in literature on armed uprisings. In particular, it focuses on warfare strategies and military tactics deployed in combat. Engaging high profile commanders of the formidable rebel group, the Sudanese Justice and Equality Movement (JEM), the author proceeds to investigate a reality he finds most perplexing. Drawing on their culture and heritage, the rebels have managed to evolve new tactics and combat techniques that enable them to out-manoeuvre Khartoum army generals despite the latter’s training in Sudan’s National Military Academy, reputed to be among Africa’s best military establishments. This is a clear affirmation of the old dictum that neither army size nor its weapons win battles. Soldiers do, if they are well trained, motivated and driven by a worthwhile cause to fight for.

Biographies of the commanders interviewed in the book show clearly that rebels are not born. They are a product of injustice, coupled by a firm conviction that such a system cannot be removed through peaceful means.

This book comes at time when supporters of non-violent political transformation are riding high on the waves of the so-called Arab Spring. The author argues that the successful toppling of a handful of dictators in the region was a result of unique and unpredictable reverberations of external factors – via social media – on already volatile internal dynamics. The fluke conditions that have led to successful uprisings in Egypt, Tunisia, and Yemen can neither be stage-managed nor replicated. Cognizant of the bare fact that one simply cannot reason with the likes of Al-Bashir, Mugabe, Ghadafi and Al-Assad, taking arms against these dictators remains the only viable option for their aggrieved populations.

The author concedes that armed insurrections come with colossal human and non-human costs. Nonetheless, that high price tag is dwarfed by the cost of “structural violence”, a term that aptly connotes despotic regimes subjecting citizens to untold death through famine, disease, corruption, extra-judicial killing and lack of development.  Although anthropologically anchored, this book will be of interest in many other disciplines that are driven by the need to create a better world. These disciplines include sociology, politics, development studies, peace and human rights studies, military sciences, etc.   Oddly enough, dictators too might find this book of exceptional value, but only if they are able to muster their meagre common sense and vacate their palaces before it is too late.

“This book offers breathtaking insights into the structure and strategy of the movement. High ranking field commanders of JEM speak frankly about their personal backgrounds, their way into JEM, the military tactics in their battles and - among others - the battle of Omdurman in 2007. This book will certainly spark controversy!”

“A most interesting book on the conflict in Darfur! Lively written, it is a brilliant example of a truly engaged anthropology!”

“This is a perceptive analysis of JEM’s military strategy, together with remarkable and sobering profiles of senior JEM commanders, bringing home the reality of war and the injustices of the Sudanese state.”

ABDULLAHI OSMAN EL-TOM, Ph.D. is Head of the Department of Anthropology, National University of Ireland, Maynooth, Ireland. He was born in Darfur, Sudan but has been living in Ireland for the last two decades. His publications include Growing up in Darfur, Sudan, SSC, Cairo (2007); Proverbs of Western Sudan, Jointly with A. Adam, SSC, Cairo (2002); and Darfur, JEM and the Khalil Ibrahim Story, RSP, USA (2011).