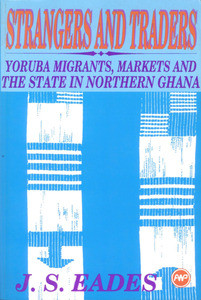 In the inter-war years, groups of enterprising Yoruba traders from a few towns in Western Nigeria established a remarkably successful trading network throughout the Gold Coast (Ghana). Using information, skills and capital generated mainly within the family, what grew to become the largest group of immigrant traders in the country had spread to even the most remote rural areas, becoming a powerful force in the Ghanian markets. Then, in 1969, they were abruptly ordered to leave the country.

At the time of the exodus, Jerry Eades was carrying out research on the Yoruba and was able to follow these traders back to Nigeria. There, on the basis of extensive interviews and archival sources, he reconstructed the history of the migration from four Yoruba towns to northern Ghana. The result is one of the fullest and most detailed accounts of chain migration and its implications for economic development ever written-- of interest not only to anthropologists and historians, but more generally to anyone with an interest in trade and informal sector labor markets, and their relationship to ethnicity, economic development and state policies in Third World countries.