STATE AND SOCIETY IN THE GAMBIA SINCE INDEPENDENCE, Edited by Abdoulaye Saine, Ebrima Ceesay, and Ebrima Sall 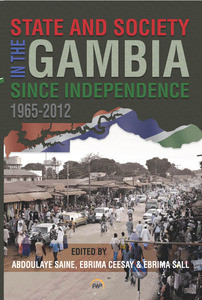 STATE AND SOCIETY IN THE GAMBIA SINCE INDEPENDENCE, Edited by Abdoulaye Saine, Ebrima Ceesay, and Ebrima Sall

The Gambia, unlike its West African neighbours, has since independence, enjoyed a prolonged spell of stability and functional democratic governance, albeit, with challenges to its social order and political structures. These continuing challenges have been evident since independence in 1965, and are manifest in the absence of an active civil society and effective political institutions against a backdrop of widespread impoverishment. In July 1994, the First Republic was overthrown in a military coup led by Yahya Jammeh. Although the army formally withdrew from politics in 1996 and Jammeh was “elected” President, a new style of governance subsequently emerged to limit constitutional rule and fundamental human rights.  This socio-historical context and its broader implications across Gambian society have largely remained underexplored.  State and Society in The Gambia Since Independence is the most comprehensive, multidisciplinary scholarly volume on the country thus far. While in some important ways the Gambian post-independence experience has its peculiarities, it also is especially unique, as its small size permits a level of detailed analysis rare elsewhere. This volume is both an essential read and useful for purposes of comparative research.

“Written by established as well as emerging scholars, this [volume] is by far, the most ambitious and comprehensive study of The Gambia's post-colonial experiences. It offers an accessible multidisciplinary introduction to those new to Gambian Studies, synthesizes the state, society and politics literature…and challenges scholars to reorient existing lines of inquiry to address gender, class and literary traditions and changes that have occurred in post-Jawara's Gambia. This book makes a lasting contribution to both Gambian and African studies.”

“This edited volume by a group of Gambian-Gambianist scholars, which is a first, represents, to date, the most comprehensive collection of essays on The Gambia. The volume is also a first for another important reason: it assembles, for the first time a cadre of seasoned scholars…whose individual works have for decades, set the standard by which scholarly works on The Gambia are measured against.”
—Professor Sulayman Nyang, Howard University

“This [volume]…represents a real achievement in the variety of subjects covered and in the analysis of the issues. With their central focus on developments in the post-independence period, the essays deal with different facets of the country’s life, from the challenges and unpredictability of official mandates to the opportunities for change and reform and the role of women in all sectors of civil society and national life. The book is breathtaking in its scope and variety as well as in the diversity of approach... [and] has the added merit of being a truly collaborative multidisciplinary work unlikely to be surpassed in the foreseeable future; and in that way a real credit to the judgment of the editors for pulling it off.”

Ebrima Ceesay is an independent researcher on Gambian Politics. He has written on issues surrounding the military, democratisation, and human rights in Africa.

Ebrima Sall is the Executive Secretary of the Council for the Development of Social Science Research in Africa (CODESRIA).