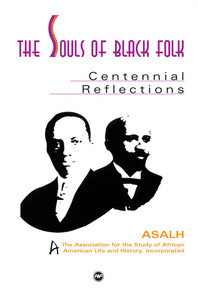 In this curriculum guide, the Association for the Study of African American Life and History continues its emphasis on Du Bois’ prophetic statement first enunciated at the Pan-African Conference of 1900 that “the problem of the Twentieth Century is the problem of the color-line,” and moreover the “double-consciousness” or “two-ness” confronting African Americans—“two souls, two thoughts, two unreconciled strivings; two warring details in one dark body, whose dogged strength alone keeps it from being torn asunder.” In addition to engaging the issues raised in Du Bois’ prophetic statement, the editors have chosen to highlight the following themes in his seminal work:

? The Souls of Black Folk Revisited
? Black History and Historians
? The Tuskegee Machine and the Politics of Accommodation
? Talented Tenth
? Race Relations
? Pan-Africanism
? The Sacred Arts

These themes are reflective of the evolving scholarship that W. E. B Du Bois expressed in The Souls of Black Folk and throughout his prolific career.

While it is patently impossible to design a curriculum guide around the fifty or more state history standards, the editors have employed the Mid-continent Region Education laboratory’s Content Knowledge: A Compendium of Standards and Benchmarks for K-12 Education as well as consulting the state standards in California, Maryland, Illinois, and Virginia in creating this useful guide.

ABOUT THE PUBLISHERS
THE ASSOCIATION OF THE STUDY OF AFRICAN AMERICAN LIFE AND HISTORY (ASALH) is a nonprofit educational organization founded in 1915 by pre-eminent African American historian/scholar Carter G. Woodson. Woodson was known as the father of black history and started implementing Black History Week in 1926. Educational materials are developed each year so that the theme-based learning resource manuals can be used by teachers, students, and scholars throughout the country to study the accomplishments of African Americans.