SOCIO-POLITICAL SCAFFOLDING AND THE CONSTRUCTION OF CHANGE: Constitutionalism and Democratic Governance in Africa, Edited by Kelechi A. Kalu and Peyi Soyinka-Airewele 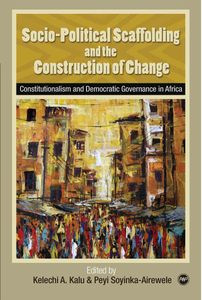 SOCIO-POLITICAL SCAFFOLDING AND THE CONSTRUCTION OF CHANGE: Constitutionalism and Democratic Governance in Africa, Edited by Kelechi A. Kalu and Peyi Soyinka-Airewele

This book explores and relays a provocative discourse on the ongoing questions, dilemmas and accomplishments emerging from the African continent’s most critical struggle today: the quest for stable polities, effective governance and meaningful transitional processes. Thus the reader is presented with various realms of the academic imagination and empirical research in a stimulating interrogation that creates a meeting ground between continent-wide theoretical analysis and provocative case studies from various African countries.

Contributors to the volume engage urgent issues central to any investigation of African politics, including: constitutionalism, democratization and the media, ethnicity, the place of traditional political institutions and the politics of current electoral processes, eloquently described as “machine politics”. With a focus on the socio-political context for democratic governance, contributors to the second section of the book examine pressing problems such as healthcare and social welfare policies, women’s positioning in democratic changes, the role of NGOs and the globalization dilemma.

Readers will appreciate the analysis of selected issues in Kenya, South Africa, Liberia, and Nigeria with case illustrations from other parts of the continent. The book provides critical access to the writings of established African scholars as they generate a renewed dialogue on core political struggles through their areas of expertise.

Peyi Soyinka-Airewele is Associate Professor of African and International Politics at Ithaca College, New York and the International Director of ACT Africa. Prof Soyinka-Airewele is co-editor of Reframing Contemporary Africa (2009) and her current research engages the socio-political discourses of popular Nigerian and African cinema and their fluid interpretations of transforming identities and issues in global and local spaces. Her work on democratic development, collective memory and cathartic violence has been published in several scholarly journals including the Journal of Asian and African Studies (now African and Asian Studies), Journal of Third World Studies, Issue, and West Africa Review.