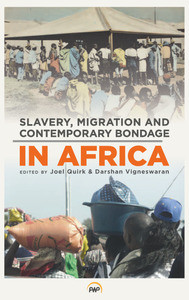 When we think about slavery in Africa we commonly think in terms of the distant past, with the most familiar images tending to be maritime slave trading in places such as the Gold Coast, Biafra, Angola, and Zanzibar, together with the horrors of the ‘Middle Passage’ to the Americas. Over the last decade, the world has woken up to the fact that slavery and human bondage remain very much alive, both in Africa and elsewhere. We now have widespread evidence of human trafficking, wartime enslavement and other forms of bondage throughout Africa. Why have these heinous practices reappeared in an era of independence and autonomy? Was slavery ever truly abolished in Africa? How have the memories and legacies of slavery and its abolition shaped contemporary practices and problems?

The essays in this volume draw upon an extensive body of new archival research and extended fieldwork in order to develop a conversation between experts on the history of slavery and abolition and social scientists, advocates and practitioners concerned with human bondage as it persists today. The product of this venture is a new and compelling set of stories about how slavery has continued, evolved and been reconstituted from the pre-colonial period to the present. By exposing the historical roots of a number of contemporary problems, this book offers new insights and information in order to help understand and eliminate human bondage in Africa.

“It is tragic that after over two centuries of struggle, the world is not yet done with slavery. It just keeps reappearing. Quirk and Vigneswaran have pulled together a group of excellent essays charting the continuing historical legacies and recent emergence of new forms of slavery in Africa.”

“In this important new collection, Quirk and Vigneswaran confront a central problem: how can there be slaves when slavery is illegal? Their answer: evolving patterns of personal attachment, mobility and poverty create a climate ripe for human bondage. This is pressing, timely and invigorating. The authors challenge readers to reconsider how legal minimalism continues to confound renewed efforts to combat discrimination, marginalization, and exploitation.

Joel Quirk is a Senior Lecturer, Department of Political Studies, University of the Witwatersrand.

Darshan Vigneswaran is a Lecturer, Centre for Urban Studies, University of Amsterdam.